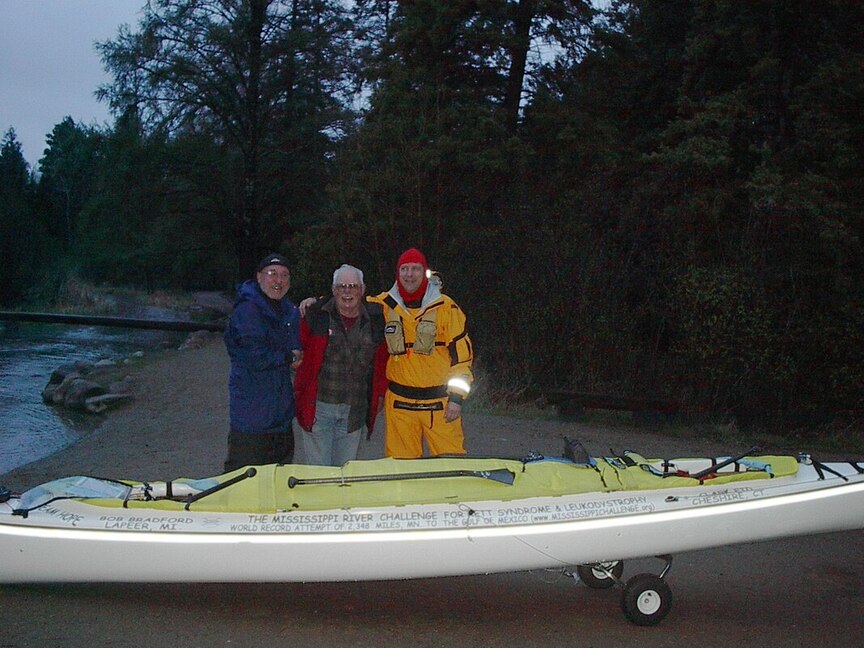 Right before the start, L to R Bob Bradford, Verlen Kruger, Clark Eid, in front of their Kruger Canoe; Mississippi Challenge for Rett Syndrome, May 2003; Camera Used Angie Phelps
Saturday, May 10, 2003
Race start, 6 AM sharp at the Headwaters of the Mississippi River, Itasca Lake Park, Minnesota, weather a little rainy, paddlers made good time today.... Many Rett families gathered at the headwaters to wish Team Hope well.  Later, Bob and Tammy Hanson (rett parents) and Chuck and Lisa Evert (rett parents) had bananas and coffee hanging off the foot bridge at Coffee Pat Damn for that paddlers to grab as they went under it (and they did)! Dave Harrington meets the paddlers.  Bill Pullen replaces Bob's cracked compass.   Paddlers report it got dark during the Cross Lake crossing.
Chronology: By the end of the day Bob and Clark have passed Coffee Pot landing, Iron Bridge, Bemidji Park, Ottertail Power Dam, Cross Lake and have arrived at Knutsen dam by 11:15 PM

Sunday, May 11, 2003
Road crew has hot stew waiting for the paddlers at 2 AM at Reese Landing and paddlers change into the kokatat dry suits.  Extremely rough overnight crossing of Lake Winny... the paddlers lost lights, waves crested over the bow, covered Bob and was hitting Clark in the chest.   Paddlers make it to Winny Dam by 9:30 AM.   Bob is the first paddler to sleep 27 1/2 hours after the start while Clark paddles.  After the Leech Lake access stop Clark sleeps 34 hours after starting while Bob paddles.   Jean Pullen writes that paddlers are at least 20 miles ahead of 1984 record... later Angie says they are behind Bob's "planned schedule" at this time (but still ahead of the 1984 record).
Chronology: Bob and Clark completed Lake Winny crossing,  passed Pokegama Dam in Grand Rapids, MN,   depart Blandin Paper Company Dam by 11:20 PM. 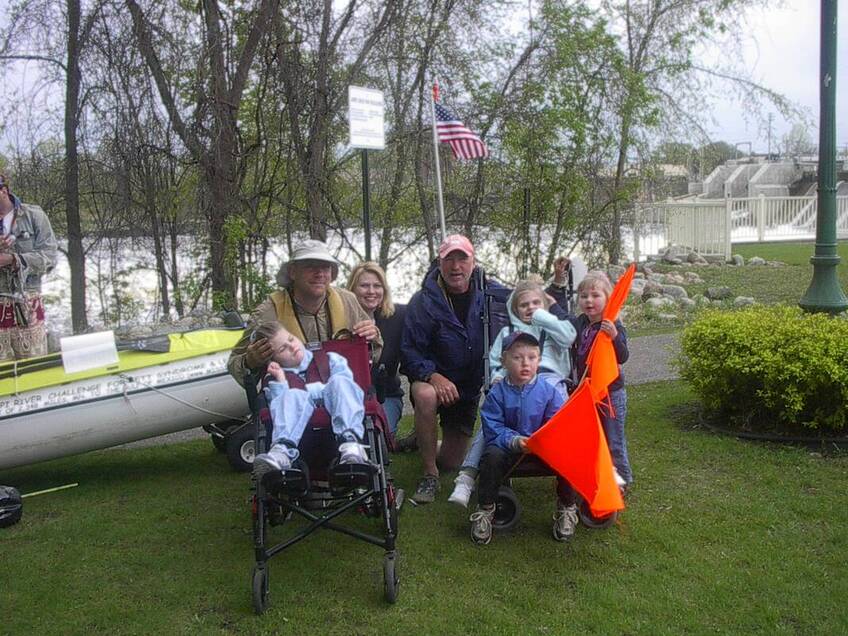 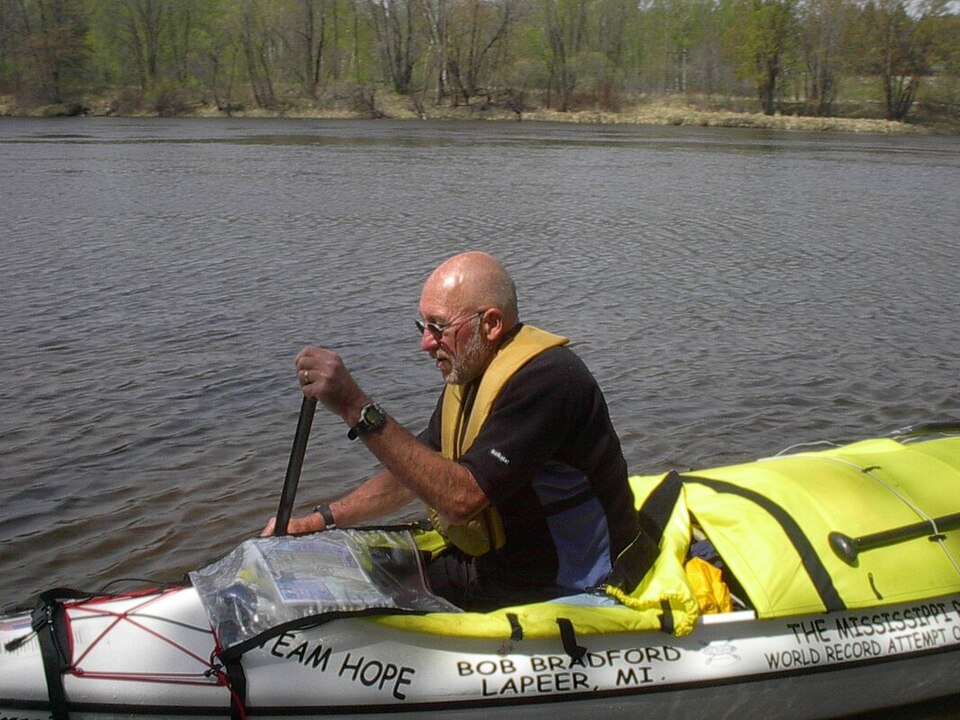 Bob Bradford, leaving Palisades, MN, Mississippi Challenge for Rett Syndrome and Leukodystrophies, May 2003; Guinness Record Event; Camera used: Angie Phelps
Tuesday, May 13, 2003
Dana says the paddlers are over 100 miles ahead of the record by this evening...Verlen Kruger gives some great advice about getting over the Diversion Dam... Stan Hanson, in an emotional moment says it doesn't matter if they break the record or not....
Chronology: Took the Aitken diversion, passed Potlatch Dam in Brainerd, MN, passed Little Falls Dam, passed Blanchard Dam. 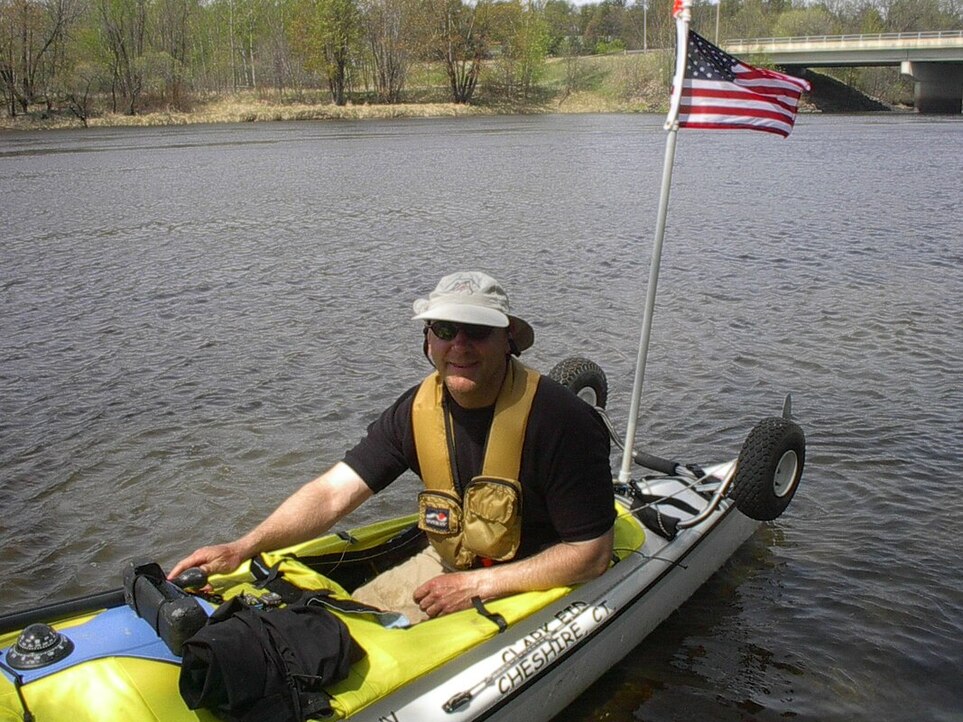 Monday, May 19, 2003
Team is at least through L&D 20, maybe 21 by the end of this day... paddlers are requesting ice, it's getting hot...Clark is taking sneaky pictures of Bob for the website "later"... the crew pulls together with the help of tug boat captains and the L & D 20 master and let the paddlers go ahead of a couple of tugs with their barges....
Chronology: ​ 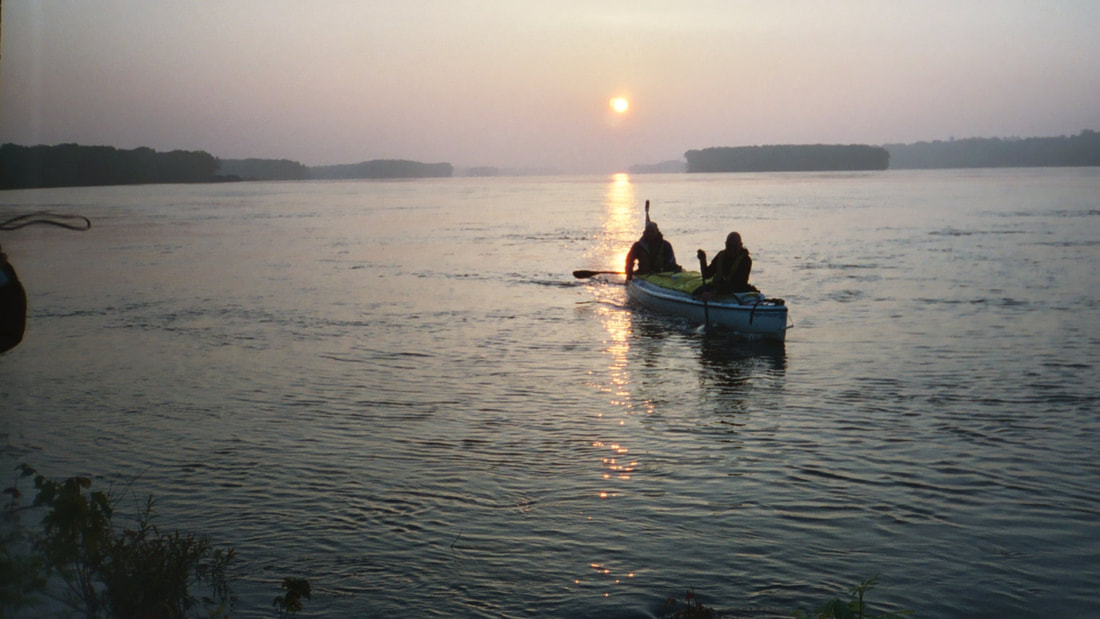 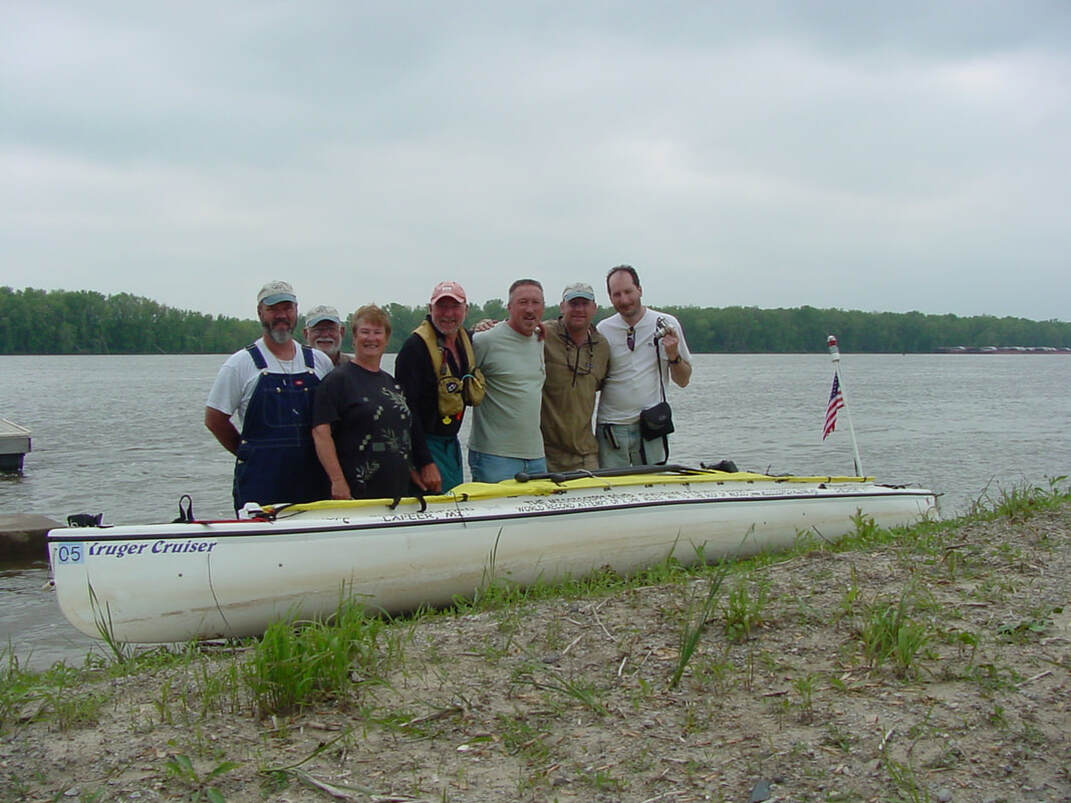 Friday, May 23, 2003 -
Mike and Denise arrive.....Lots of flooding going on so it's hard to meet the paddlers....Janet attempts to ignite her van by puncturing her gas line....
Chronology: 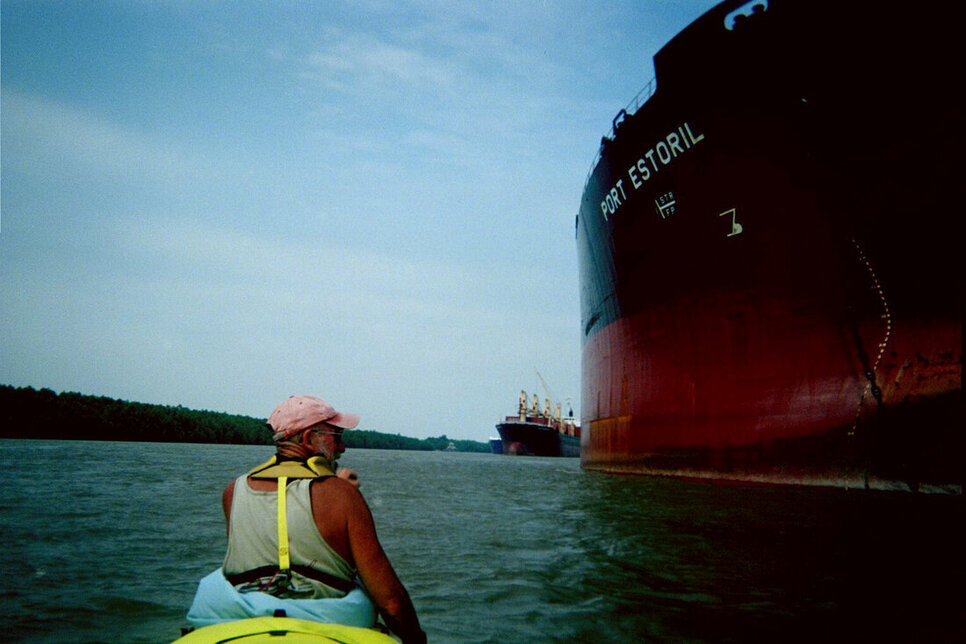 Near Baton Rouge; Bob Bradord, Mississippi Challenge for Rett Syndrome 2003; Camera Used: Clark Eid
Sunday, May 25, 2003 -
What to do about floating debris....Buffet or a sandwich for lunch?... Things are just a tad bit wet tonight....
Chronology:

Tuesday, May 27, 2003 -
Desiree has joined the road crew ....Paddlers are facing heavy fog this A.....The barges are getting nasty, winds are high, waves are rough.....
Chronology: 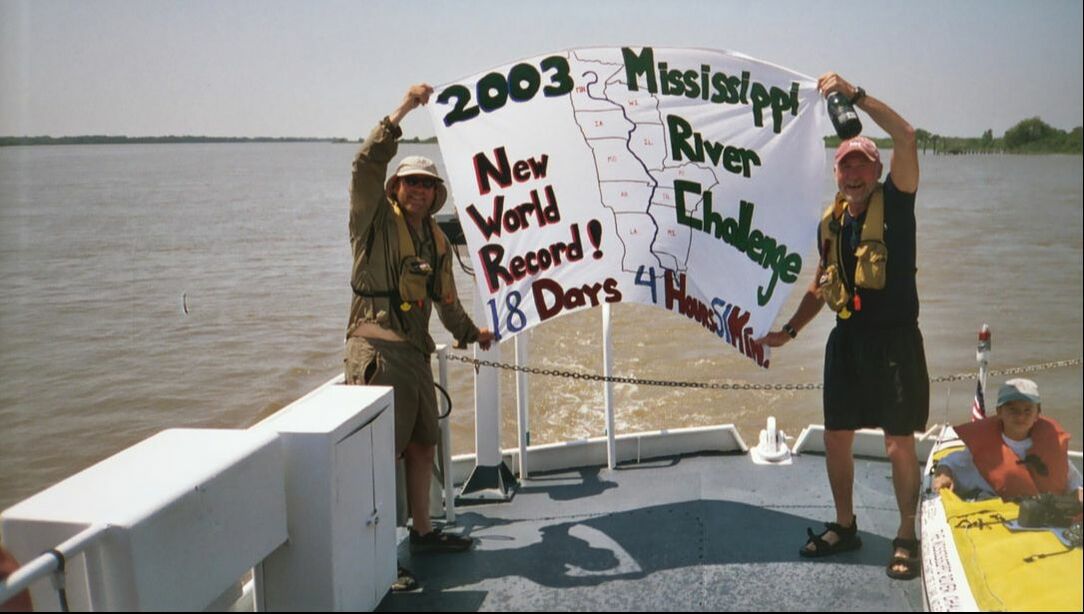 After the finish: L to R Clark Eid Bob Bradord, Bob's grandson Justin sits in the canoe; Mississippi Challenge for Rett Syndrome 2003; Camera Used: Bill Pullen
New World Guinness Record!
Fastest time to row the length of the Mississippi River by a team 18 days, 4 hours, 51 minutes
Paddlers: Bob Bradford and Clark Eid; Team: Team Hope
Bob and Clark were motivated by a love of paddling and the spirit of competition. But behind that, it's a deeply personal undertaking for both men. Clark's daughter has Rett syndrome and Bob's family has been affected by Adrenoleukodystrophy, so they're taking on this unique challenge to raise awareness and research funds to combat these two very different  life threatening rare diseases
Please note -   We raced against the clock to beat the previous Guinness World Records set in 1989 and 1984 and often refer to our current progress vs. the 1984 Guinness Record since we had more data on that record and records were only 30 minutes apart. 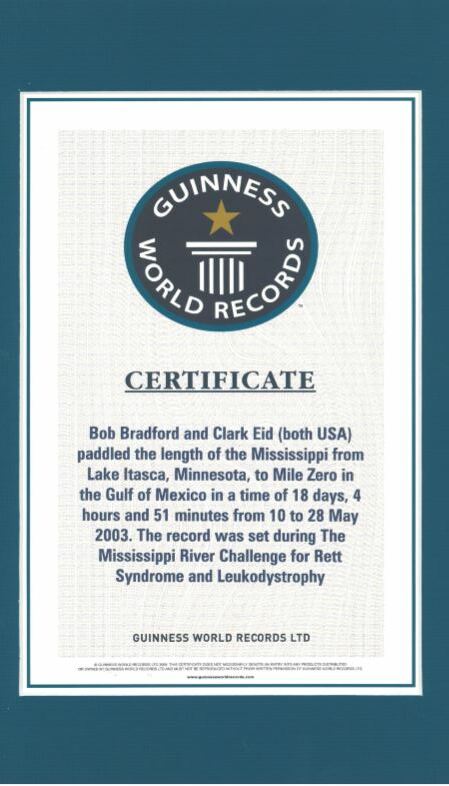