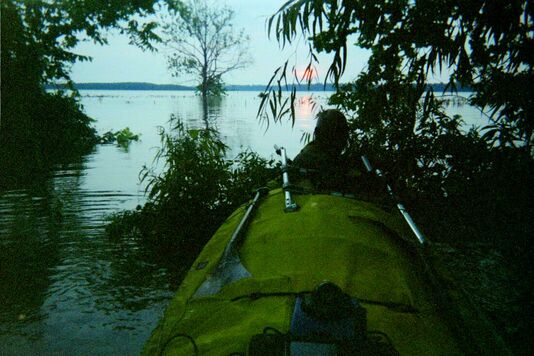 (BB) It was very dark and a little rainy.  There was a lot of debris in the water.  Somewhere near river mile 480, I was back up and paddling with Clark once again.  I saw a large root system on the right side just ahead of us.  What I didn't see until it was too late was that the root system was still connected to an 11 inch diameter tree that had fallen and was only about two inches under water.  The bow went over the trunk but about half way back we were grounded on it.  Clark and I paddled vigorously, trying to slide our canoe off of it.  It seemed like a few minutes before we finally slid the rest of the canoe over the trunk.

(BB) Just after Cottonwood Bar, at river mile 469, we were starting to break down from exhaustion.  Neither Clark nor I could keep our eyes opened.  Both of us had gotten less that even two hours of sleep in the last 24-hour period.  We pulled into the right bank and through the flooded tree line to some slack water.  We through a rope around a couple of trees and both slid down under the tarp for some shut-eye.  We zipped our spray skirts to keep the bugs out and slept hard for an hour.

(CE) I was way past my sleep cycle, and I had a terrible time keeping my eyes open.  I'd toss water on my face, make grizzly faces, stare with one eye then the other, and I still kept nodding off.  I just couldn't keep going.  Bob was tired, too, and I could see him struggling to keep a proper paddle stroke.  There were dark clouds to the north of us and we could hear thunder.  We talked and thought it best to grab a nap before we did something stupid.  The right bank was flooded and we thought we'd pull into the trees, tie the canoe up, and sleep in the canoe.  We had thought this option through before and it worked out well.  I just pulled my fleece coat over my head to keep the bugs out.  Bob said he would set his watch for two hours, but the alarm went off only one hour later.  Still, the rest was needed and we continued on.
​
(BB) It was just after that point when we had to use five of my old maps from the 2001 race.  For some reason, we could not locate our maps from #91 through #95 and neither could the road crew.  I had grown used to the nice laminated maps that Clark had made up so the change was very hard to accept.
(BB) We arrived at Vicksburg at 10:20 am.  Our team was at Isle of Capri Casino on river-left.  Stan had tried to get some food from the breakfast bar brought out to us but the casino wouldn't allow him to do that.  Clark didn't want to go in but I didn't want to pass it up.  Mike took me in and bought my breakfast.  I was a little on the ripe side in a wet tank top and faded shorts and of course my red (by this time faded to pink) Helly Hanson ball cap.  A lot of people were staring while I was eating and Mike had already ate so he just sat with me.  I know that everyone was probable thinking how nice that this young man was buying an old homeless guy his breakfast!

(BB) Clark's nap was short, then I laid down around Togo Island Dikes.  We did cut these bends partly to stay out of the head wind, but also it was rather deep.

(BB) At Grand Gulf lsland Light, Mike and Stan came out to meet us in the other canoe.  Our team was to meet us at the landing, which was in a bay on river-left.  Because of the heavy flooding, they came out to meet us and guide us back through the trees to the boat ramp.  It was 3 pm and it looked like a storm was brewing.

(BB) I went down for a sleep again after we left the feed.  The rain had also started to come down.  Even though I had the spray cover zipped up it would drip on my head.  Clark suggested that I zip myself up into his REI GoreTex bag and I could stay dry.  It worked and I slept well.
​.
(BB) At Natchez we met out team under the US 84/98 bridge at river mile 363.  It was getting dark. 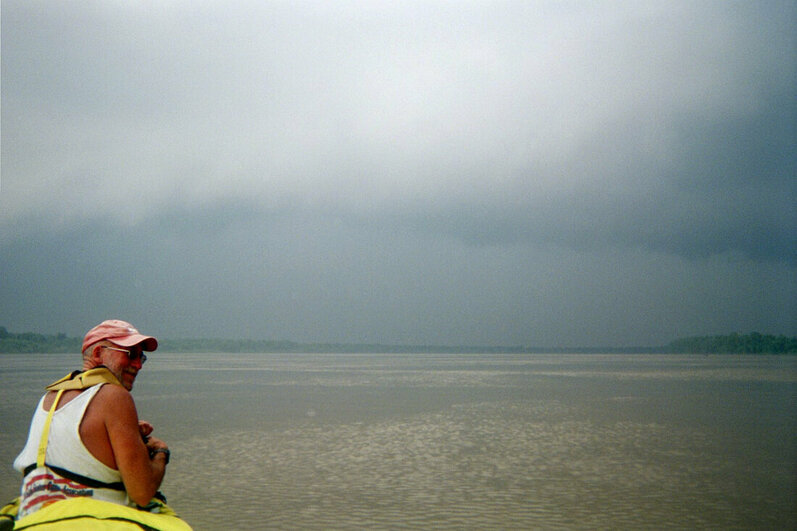 Stan called 11:20 AM CST, said the paddlers left Vicksburg a little bit ago, next stop would be 1/2 way between there and Natchez, Mississippi. Said all is well, the paddlers are groggy but fine this morning, no storms, weather getting hotter, wind about the same..... he mentioned the paddlers might try to get done in less than 19 days now....
Mary

At 6:15pm, Stan tracked me down having Sunday dinner with my folks and his aunt. The landing that Bob & Clark were heading for at River Mile 405 was under water, so the crew had to find an alternate landing site. They did, but it wouldn't be easy flagging down Clark & Bob. So Mike and Stan put the extra Kruger Cruiser in the water and paddled into the river so they'd be seen. After two hours of paddling around a bit and talking with the tugboat captains who passed by, Clark & Bob finally showed up. They followed Mike & Stan to shore, and from there headed back to the trailer. As soon as they got to the trailer, it started raining. It's been raining ever since (or at least until 6:15pm.).

The crew is at River Mile 363 in Natchez, MS. They're under the west end of two adjacent bridges, so technically, they're in Vidalia, AR. Jason is proving he's all boy, running around in his sandals and shorts, getting all wet, as it's raining quite hard. Not hard enough to cause the paddlers to stay on land for a while, but hard enough that it's managing to somehow get into the canoe. The paddlers are expected in about two hours. (At the time of this posting, they are hopefully already there.)
Dana
Next Day, Monday, May 26, 2003