(BB) At Fort Jackson, it was 8 am and we only had 20 miles to go.  Clark and I had the crew pull
out the sleeping pads, sleeping bags, spare batteries and anything we thought we could do without.  We stocked up on cans of Boost and other energy bars and took off.

(BB) Clark and I felt very good on this last stretch.  We had both taken a good nap after leaving New Orleans and we were now 32 hours ahead of even my schedule at Fort Jackson.  In no time, we were at river mile 10, which is Venice.  The river captains all refer to this area as the "Jump".   It's where the river splits up and the "Great Pass" goes right while the main river still goes southeast to "Head of Passes", also known as "Mile 0”.  At river mile 10, the highway ends and our road crew had to board the "Authority II", which was to be our escort boat for the last 10 miles.

(CE)  We were on the last leg of the journey and pushed our paddling rate to more than 60 strokes a minute.  This was the time to burn out and we enjoyed the effort.  The audio recorder was started but ran out as we approached the end, unfortunately.  Mile 0 is actually in the channel, with the physical marker further downstream by a couple hundred yards.  As we passed over the Mile 0 position, our team had the chase boat blow its horns in celebration.  We continued onto the physical marker nevertheless, needing to lay hands upon it for a feeling of closure.
​ 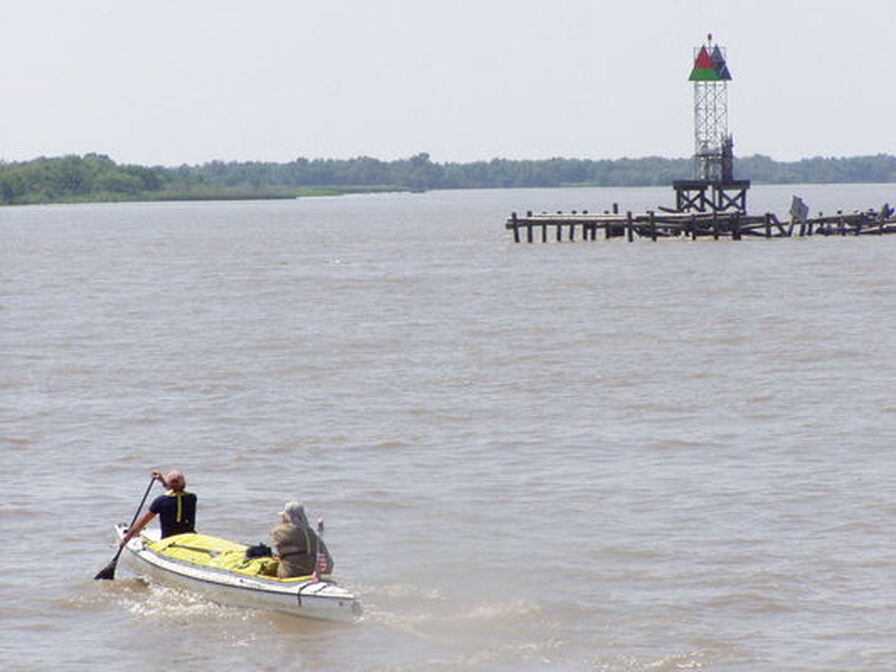 L to R, Bob Bradford, Clark Eid head towards the finish line; The Mississippi Challenge for Rett Syndrome and Leukodystrophy May 2003 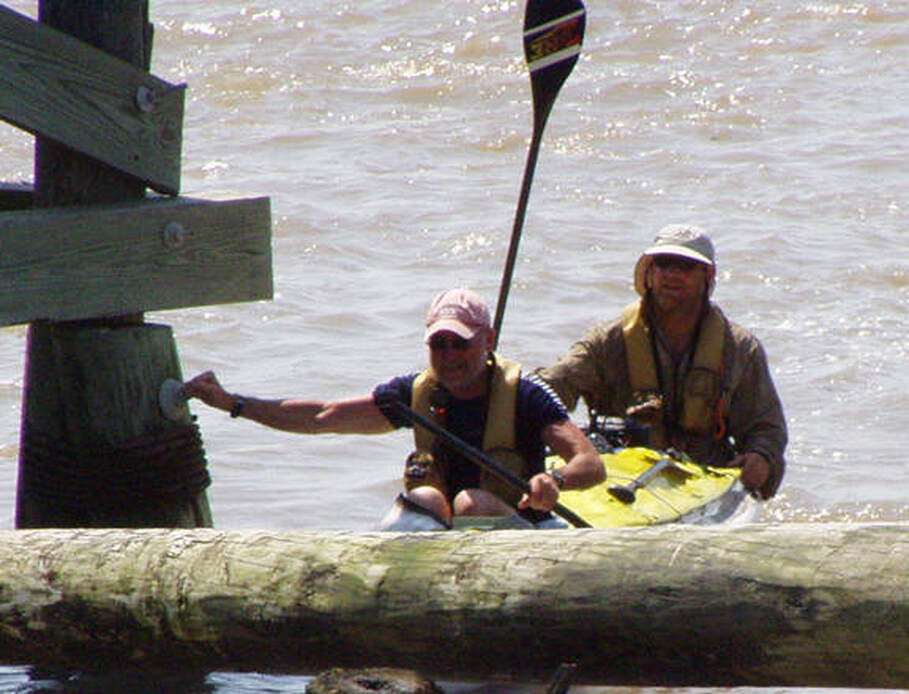 L to R: Bob Bradford, Clark Eid. The Challenge is over! The prior records are smashed! New Guinness World Record Set During The Mississippi Challenge for Rett Syndrome and Leukodystrophy May 2003 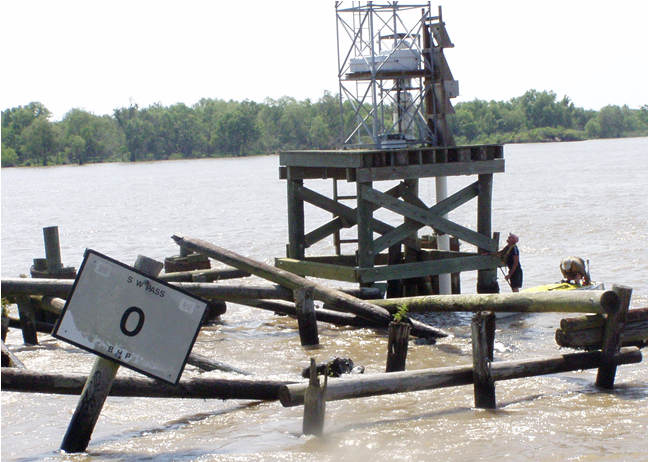 Mile Marker 0, L to R Bob Bradford, Clark Eid, stretching after being in the canoe for a few thousand miles :-); The Mississippi Challenge for Rett Syndrome and Leukodystrophy May 2003
(BB)  We called our road crew as we paddled past “The Jump”.  They had just barely arrived and were motoring off the docks to join us.  Just as we approached mile 10, we spotted our road crew on the escort boat.  We were not on our way to the “Head of Passes” with an escort boat and all our road crew cheering for us.

(BB) The last 10 miles went by faster than either Clark or I could believe.  We drank a couple Boost and some water on the way.  Our escort captain did an excellent job of talking to the other boat captains and telling them to slow down or passed the other side so we could have a smooth of a ride as was possible.  Our crew took a lot of video and my 5 year old grandson Justin got to drive the 62' boat a few miles.  He even got to blow the siren.  When Clark and I got near the Mile O marker, we had to paddle hard to the left of it.  The current was very strong at the head of Passes and the mile O buoy is located between the south and southwest passes.  On the left there is a pass called Loutre.  If you are not careful, the current in the southwest pass will sweep your canoe right past the point where the O buoy is located.

(CE) Everyone on the boat was celebrating.  The team had made a banner with our record time of 18 days, 4 hours, 51 minutes marked on it, and bottles of champagne were opened.  The team was mostly focused on the record time at that moment and failed to mention either Rett Syndrome or Adrenoleukodystrophy on the banner.  Bob was surrounded by his family while I tried to find a quiet spot to call Mary to tell her the news.  We spoke briefly because she had to attend to Amanda who was having a seizure at the time.  This also happened at the end of the 2001 event.  I felt emotionally drained once more; feeling terrible for Amanda suffering, terrible for not being there with Mary and Noah.  The event was successful, a world record set, and I could only hope that some hard-to-measure good for our sick kids would come from it.

​(BB) My grandson Michael had been on part of my 2001 trip with his dad Mike.  At that time he had told Mike that he wanted to do the Mississippi trip with him one day.  During the 2003 trip, Mike and I had taped Michael’s picture on the bow of my canoe.  Michael had gotten his wish.  He went the whole trip with Clark and me.  There wasn’t a day that went by that I didn’t think about Michael and I talked to him all along the way.  Michael G. Bradford died from adrenoleukoduystrophy on August 20, 2001.

END OF PADDLER'S LOG, By Bob Bradford and Clark Eid 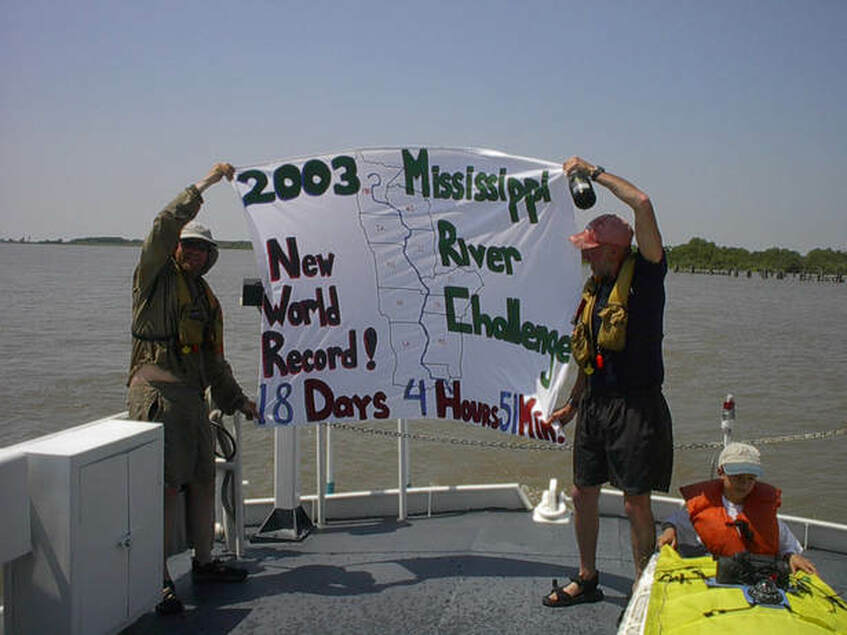 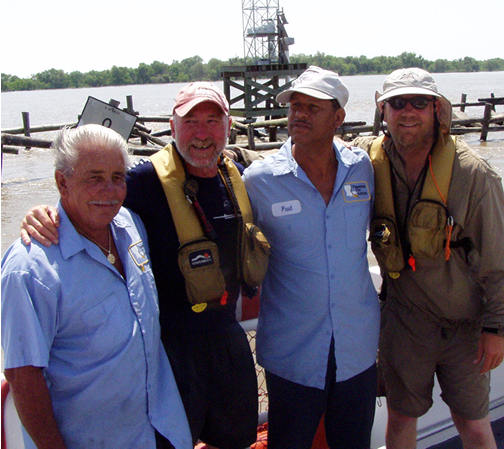 Record Smashed! L to R: Douglas Fitzgerald, Bob Bradford, Paul Sylve, SR and Clark Eid; May 28, 2003; Mississippi Challenge for Rett Syndrome and Leukodystrophy, May 2003
​____________________________
Posted by Andrew M. Gribble at 7:10 AM
The road crew is sitting in Fort Jackson, having the breakfast of champions: Twizzlers and Fritos. The mosquitos here are as bad as we've seen anywhere. Bob & Clark should be here in less than an hour. They called a short while ago, and said that they don't want any food, just enough drinks to get them to Head of Passes. Our plan for the next few hours is as follows:
Give paddlers water at Fort Jackson.
Road crew drives as quickly to Venice Marina and gets on the Authority II.
The Authority II escorts the paddlers to River Mile Zero (aka Head of Passes).
World Record gets smashed.
At present, it looks like Tony's guess of 18 days, 5 hours and 32 minutes will be the closest. High water (aka fast current), little rain and favorable winds have led to an amazinly fast time, one which no one predicted initially (Bob's schedule had them completing the event in 19 days and 15 hours).
All are in good spirits and looking forward to the dash to the finish line, which lies 20 miles downstream of our current location.
------------------------------------ 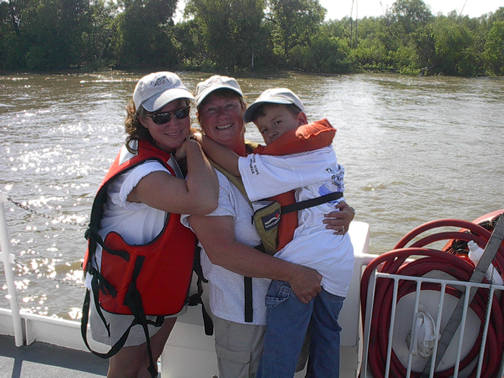 After the finish, L to R Angie Phelps, Janet Bradford, Justin; Mississippi River Challenge for Rett Syndrome and Leukodystrophy, May 2003
_______________________________
Posted by Dana Hanson - 7:45 AM
At 7:45am, the support crew is waiting at Fort Jackson (River Mile 19).  Bob and Clark are expected around 8am -- they can see them at the far point.  The end is (almost) in sight!  Stan believes they won't be really stopping here, just picking up vittles and liquids.  (Probably too excited to get out of the canoe!)  Stan will have to start making phone calls to alert the Authority II that Bob and Clark are 19 river miles away.  The Authority II will be ready to jump out and escort them from Venice to Mile Zero.  Wish I could be there again for the end.  I'm so jealous!

The Captain of the Plaquemines Parish fireboat that escorted the paddlers from Venice to Mile Zero two years ago has retired.  His son Clinton was also present at the end of the 2001 race -- kept saying that history was being made.  Clinton is now the Captain of the Upper Parish fireboat.  Last night, Clinton met Clark & Bob 12 miles above Belle Chasse.  When the paddlers stopped for breakfast, Clinton stopped his fireboat and joined them.  When all were ready to leave, Clinton went outside to start up the fireboat.  He was going to escort them south of Belle Chasse for several more miles.  However -- he couldn't get the fireboat started again.  So Bob & Clark had to paddle without escort.  Like they're not used to that...   :-)    Regardless, it was neat seeing Clinton again!

Angie Phelps has started handling out special t-shirts.  At the headwaters -- some 2,348 miles ago -- she took pictures of Bob and Clark with all the various crew members.  She turned the pictures into iron-ons and made everyone a unique t-shirt.  Stan said the pictures were definitely taken at the headwaters because Clark has no facial hair and it was before he shaved his head!
​
Just think, as Clinton would say, we're about to witness history in the making once more!!!
Mary Posted: 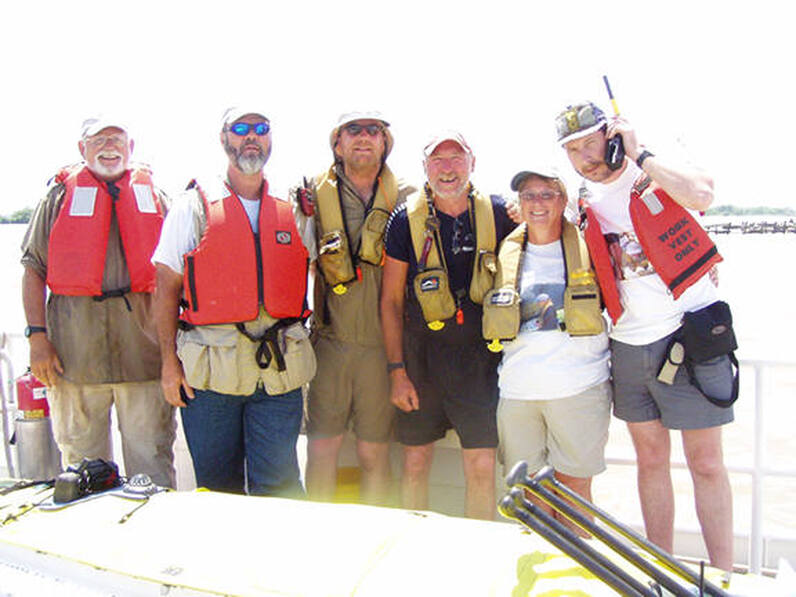 Guinness Certificate; The Mississippi Challenge for Rett Syndrome and Leukodystrophy May 2003