Paddler Log by Bob Bradford and Clark Eid
​Saturday, May 17th, 2003
(BB) We arrived in the very early morning at the boat ramp below L&D #10 in Gutenberg, Iowa.  Both Clark and I decided that we should take a three hour nap in the trailer and van before heading back out.  At the dock below the lock our crew was waiting and we met kayaker Toni Bryant and his son-in-law Andrew Olsen.  Their family had fed our road crew and let them take showers and naps the night before.  They brought us some of the spaghetti that they had left.

(BB) The nap did us lots of good and after eating we took off once again.  Some people were there with a fishing boat and they were taking their five dogs for a boat ride.  The dogs were running wild around us and the kids.

(BB) We paddled through the pool above L&D #11 with some wind.  We were trying to keep ahead of a couple of tug boats but we didn't quite succeed.

(BB) We arrived at L&D #11 in DuBuque, Iowa, at 3:30 pm.  As we locked through, I looked up on the observation deck and saw my brother Don taking pictures of us.  Is was a surprise to see him.  Janet had called my friends Dave Timmerman and Dena Kurt to let them know that we were in town.  They planned on joining us to paddle along for a spell. 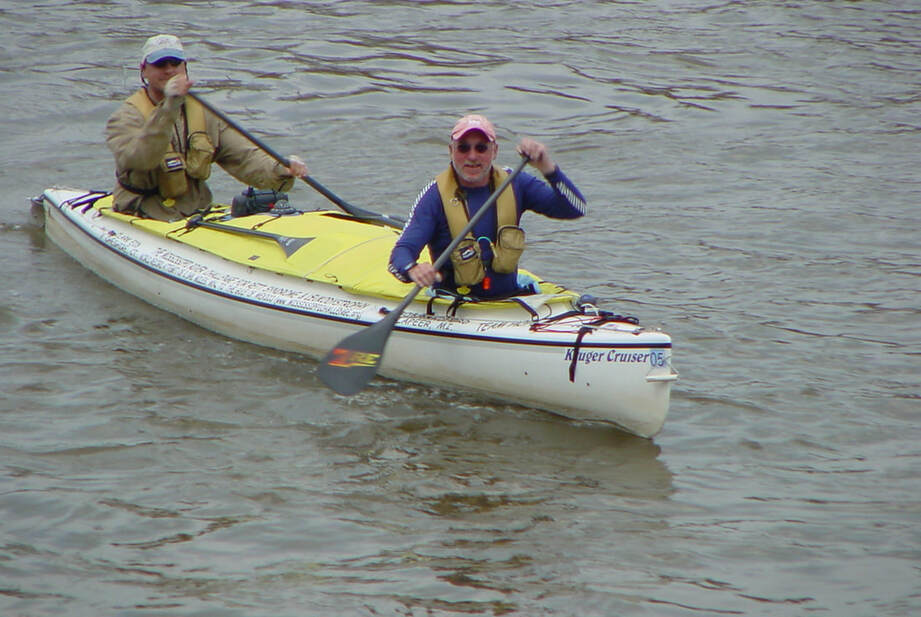 L to R Clark Eid, Bob Bradford, approaching lock and Dam 11, near Dubuque Iowa, May 17, 2003; Camera Used Don Bradford, Mississippi River Challenge for Rett Syndrome and Leukodystrophy, May 2003
(BB) We took off after fixing my thumbs and talking to my brother.  During the next week, I needed my thumbs cleaned and re-bandaged 4 times a day.  Usually while I was eating with one hand, someone was fixing the other.

​(BB) As we were leaving L&D #11, Clark and I saw Dave Timmerman and Dena Kurt drive up while blowing their horn.  We kept paddling knowing that they would catch up to us somewhere along the next stretch.

(BB) They caught up with us at about river mile 579.  They were in a pro-canoe and with the pleasure boats and tugs in the area, the water was very rough for them.  Dena and Dave took on some water but they kept the boat upright.
​
(BB) At L&D #12, we ate, took care of my thumbs, and said good-by to Dave and Dena.  When we left, I was laying down and Clark was paddling.  We had made good time while Dave and Dena were with us. 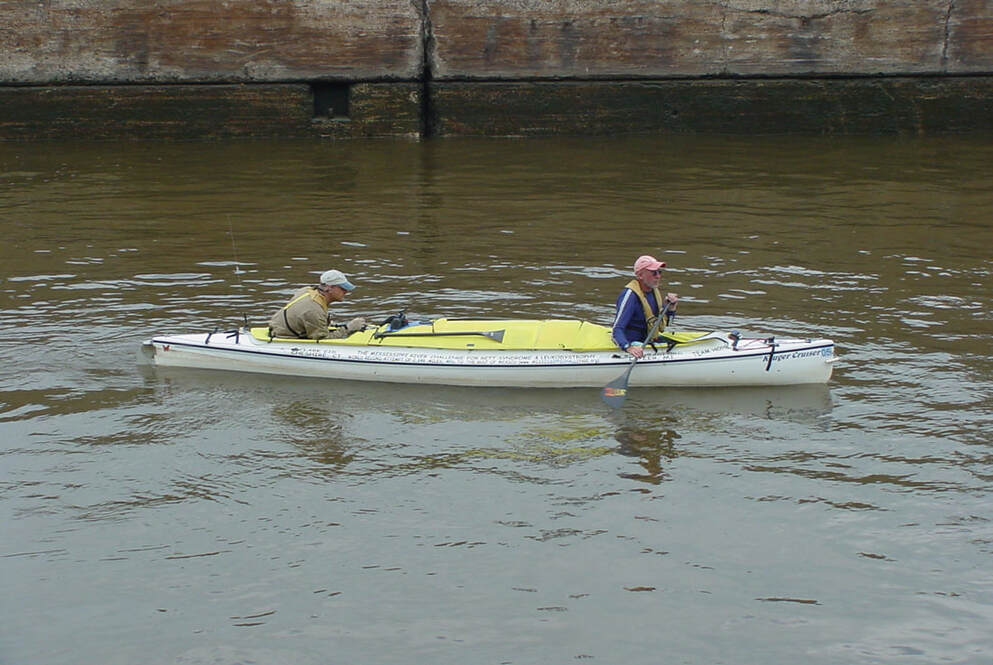 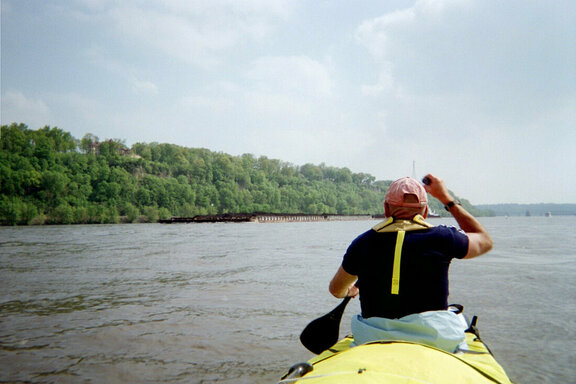 Bob Bradford up front; Paddlers passing a barge; Photo By Clark Eid; May 17, 2003; Mississippi Challenge for Rett Syndrome 2003
Posted by Tammy at 7:10 AM
​
I sure got a good laugh this morning reading the blog here, it seems that the rice krispie bars Andrew is talking about have become a trademark 'snack' for Team Hope. I made them for the headwaters and they went over so well I made another batch for our meeting in Palisade. I was talking to Danita Baker (Rett Mom to twins) who was meeting them in Little Falls Tues evening and she told me she was ordering pizza, but was bringing rice krispie bars. I stopped her right there and asked "what kind?" When she told me, I realized it was the same ones I had brought, I told her that they would love it. Now, I see Bruce Bryant included them with his meal in Iowa, too funny.

Well, I think I will put the recipe here just in case anyone else is going to be meeting up with Team Hope, I think they will be expecting some from now on :-).

Krispy Bars: cook 1 cup karo syrup and 1 cup sugar until it bubbles, take off of stove and add 1 1/2 cup peanut butter. Mix in 5 to 6 cups rice krispies and smooth out into 9x13 pan. Melt 1 cup butterscotch chips and 1 cup choc chips for frosting. 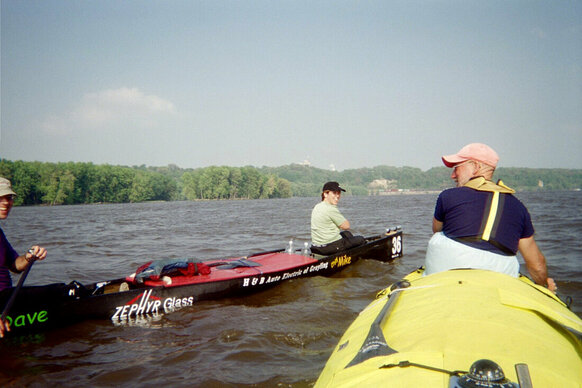 Posted by Tony at 9:24 AM
I was looking all late afternoon and into the evening last night for the progress of TEAM HOPE and the automatic tracking was not working. So glad to see the team well down the river this morning. TEAM HOPE is just doing a fantastic job! I'm always looking on the web to see their position and their overall mileage. As of this morning they are averaging over 100 miles a day. I sometimes have trouble driving 100 miles yet alone paddling it! It seems if I don't get my "location" fix every few minutes I start having withdrawals and begin to pace around my house or office cube. I have discovered it doesn't matter how many times I hit the refresh button, if the autotracking isn't working I can't will it to work!
Andrew, tell the paddlers we are thinking of them constantly and wishing them the best. It also appears that Krispy Bars will be falling from heaven for the remainder of the trip!
-Tony 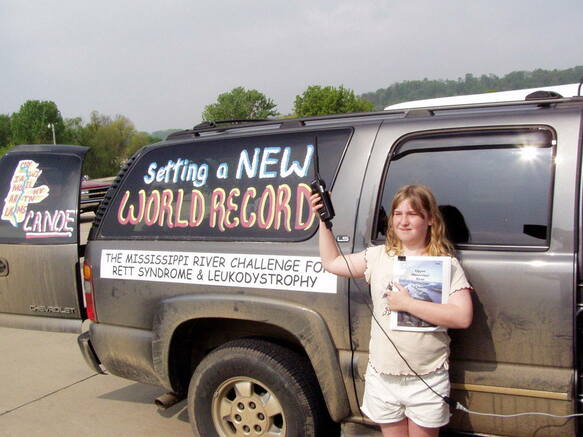 Angie Phelp's daughter holding up a satellite phone to get better reception... and a set of river charts and maps (remember the olden days?)... in front of the Bradford Van. Guttenburg, Iowa ; Camera used Andrew Gribble; Mississippi Challenge for Rett Syndrome and Leukodystrophy, May 2003
Posted by Mary at 4:54 PM
Heard from Stan and Clark today. Clark and Bob apparently had to actually sleep for 4 hours at the same time early this morning.... Last time I heard, they were in Dubuque, Iowa about 3 hours ago.
Mary 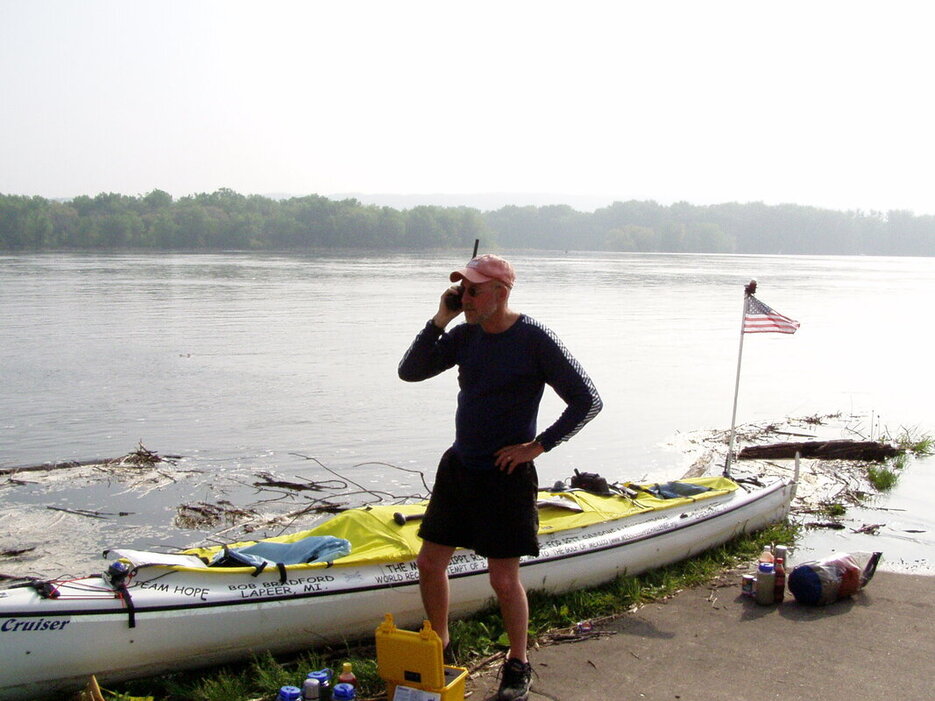 Bob Bradford Talking on the Satellite Phone, Phone was stored in the Yellow Case by his feet (in the canoe normally), You can see the ice water, drinks, thermos of coffee ready to be taken with the paddlers; Guttenberg, Iowa, May 17 2003; Camera used Andrew Gribble; Mississippi Challenge for Rett Syndrome and Leukodystrophy, May 2003
Posted by Andrew M. Gribble at 6:45 PM
​
Team Hope would like to tip its hat to a young man at the RadioShack at Warren Plaza in Dubuque, Iowa. Bill Pullen said Peter Dyrke is an honorably discharged ET2 from the USS George Washington. Peter helped Bill put together--on the spur of the moment--a battery pack and lighted compass for the safety of the paddlers. Without Peter's help this job would have been an almost insurmountable task working out of a back of a minivan. The US Navy produces some fine technicians, of which Peter is one. Many thanks again to RadioShack and Peter from Team Hope.
-AMG
____________________________________

​posted by Andrew M. Gribble at 6:32 PM
Met Bob & Clark below Lock & Dam #11 in Dubuque this afternoon, and fed them a lunch of Subway sandwiches and ice cream (the latter a gift from the Dairy Queen in Wabasha, Minnesota). Both paddlers were in great spirits, having slept for four hours on shore in Guttenberg, IA, and having made great time from Lock/Dam #10 to #11.

​I downloaded the data from their on-board GPS, and noted the following:

The road crew is now waiting below the lock at Lock/Dam #12, where we expect Bob & Clark to arrive sometime around 19h00.
--AMG
​ 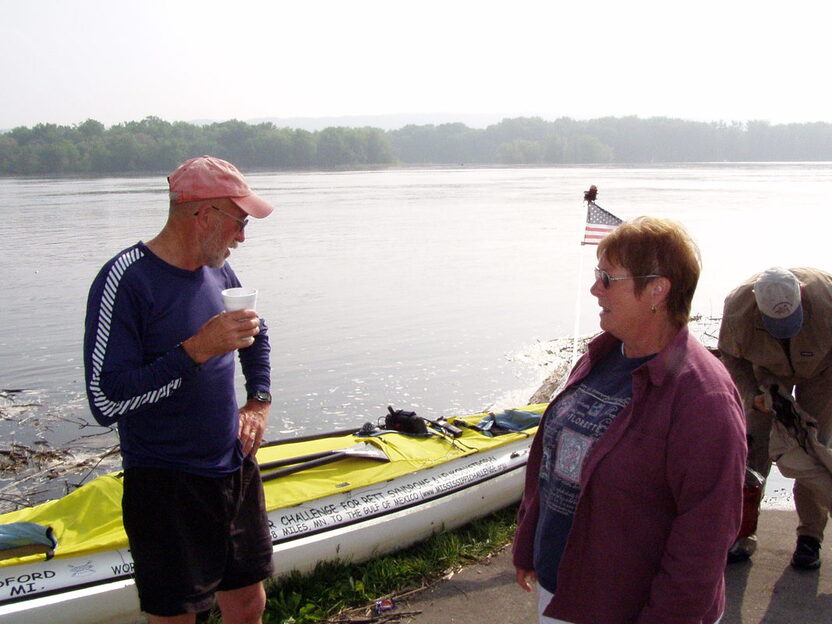 Posted by Dana at 9:52 PM
After what obviously was a good paddling day, I received this email at 9:45pm CDT:
Sent: Saturday, May 17, 2003
Subject: Good job! Keep going!
To: The Whole Crew, and Bob & Clark
Wow, Good job, keep going. I hope the wind will be at your back, you will always be going down stream. Get some sleep! It was a real treat for me to paddle with you guys for a day. You have a determination and a goal that shows in a very positive way.
Best of Luck, Keith 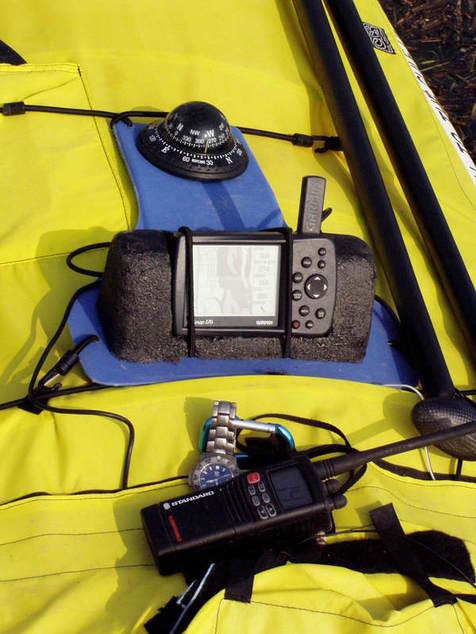