BB is Bob Bradford, CE is Clark Eid
​
(BB) In the morning, we met our road crew at the campground up river from Jacobsen (river mile 1143). We had pancakes, bacon, and hot coffee.
​
(BB) Our next feed was at Gene "The Artist" on river left. In 2001, Verlen and I paddled our canoe up into Gene's front yard but this time we met our crew just below his house. After grabbing a bite to eat, Janet and David put in the water to paddle along with us. They took off one or two minutes ahead of us. They planned to paddle with us 21 miles to Palisade.  I remember Clark asking, "Should we just paddle along slow with them"?  I said that I thought they would be fairly fast. It took us about twenty minutes to catch up with them.  When we arrived at Palisade, our road crew was impressed with our average speed for the 21-mile stretch.

​(BB) At Palisade, Tammy Hanson had a chicken dinner set up for us under the park pavilion.  My friend Todd came down to see how Clark and I were doing and also to see Verlen.  Todd had fed Verlen and me in the 2001 race. 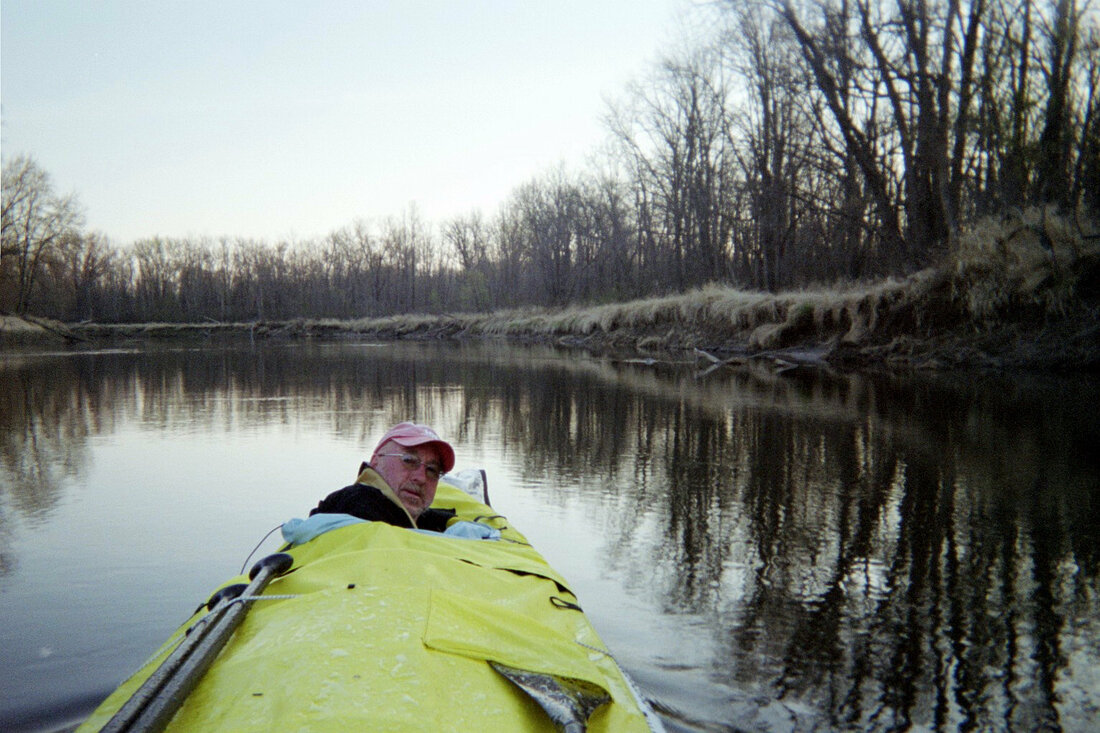 Bob Bradford waking up, Below Grand Rapids, MN, May 12, Mississippi Challenge for Rett Syndrome and Leukodystrophy, May 2003, Photo By Clark Eid
​(CE) We pulled into Palisade upstream of the bridge to meet our crew. It was a great surprise to see that the Hanson's had put together a great picnic under the pavilion.  Rachael Hanson, Tammy's and Bob's little girl, was delighted to see us, and us her.  She reminded me a lot of my Amanda, and I was a bit emotional ... joy at seeing her, sadness about being away from my family.  I called Mary on the satellite phone and afterward had a really nice chat with Verlen.  We left at 7:50 pm, with Bob sleeping until the 169 bridge. I then took a sleep cycle from there to just before the entrance to the Aiken Diversion Channel.
​(BB) I slept until reaching the 169 bridge at river mile 1078.  Our plan was for me to call our road crew on the satellite phone when I got up and they would let me know if we could take the diversion channel or not.  I had called my friend Dan Cruiser from Palisade and he thought that even if there was low water, it would pay off to take the channel.

(BB) Verlen had said that he and the road crew would drive down and check it out before dark.  The road crew and Verlen walked approximately half a mile to check out the entrance of the Diversion Channel.  When I called for a report, they already had everything planned out for us.

​(BB) There was a one and a half foot drop which we would have to maneuver through and then twenty feet down there was another drop of about three feet.  Verlen and Stan had laid logs over rocks so that we could slide the canoe over without any major damage.
​
​(CE) I woke to Bob talking on the satellite phone.  We shortly after reached the entrance to the Diversion Channel, and was pleased to find the logs Verlen and Stan laid down for us to drag the canoe over.  We also had to line the canoe for a short distance at the bottom of the last drop, and used the tether to pull her back into shore.  The weather was holding clear and cool, and we turned on our mini-disk recorder as we paddled.  The water had a little current, but remained glassy enough to reflect the stars overhead. We talked a lot and made good time through the length of the channel. 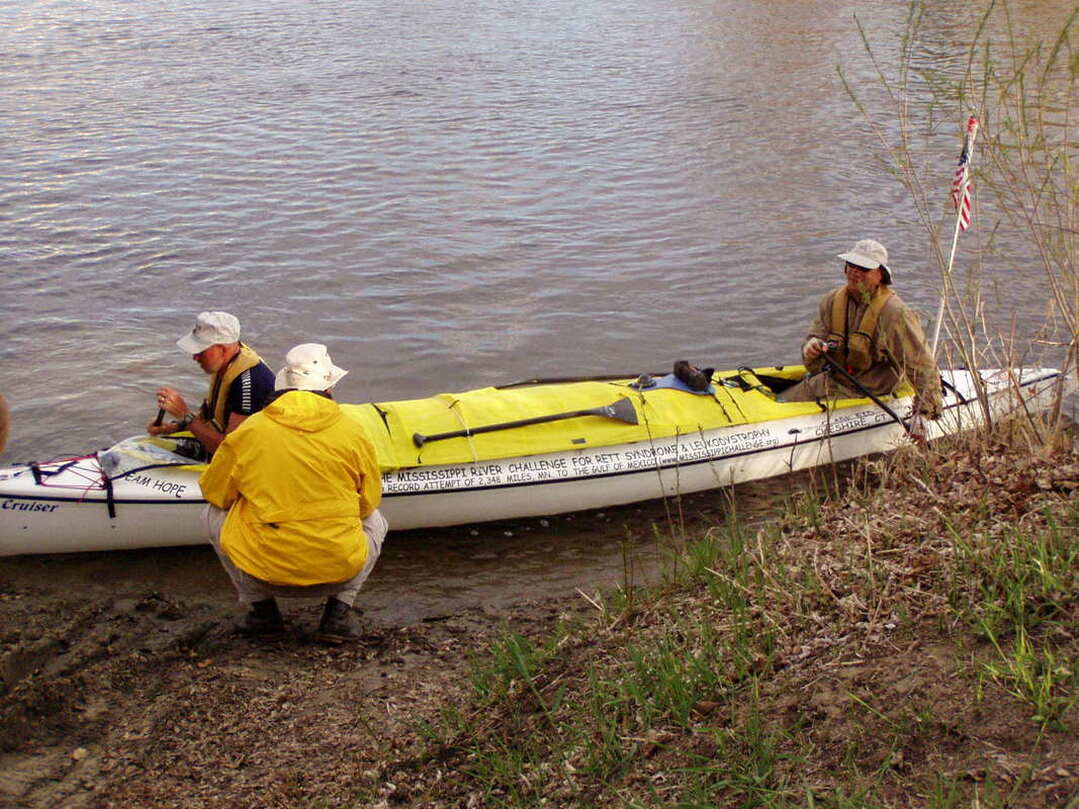 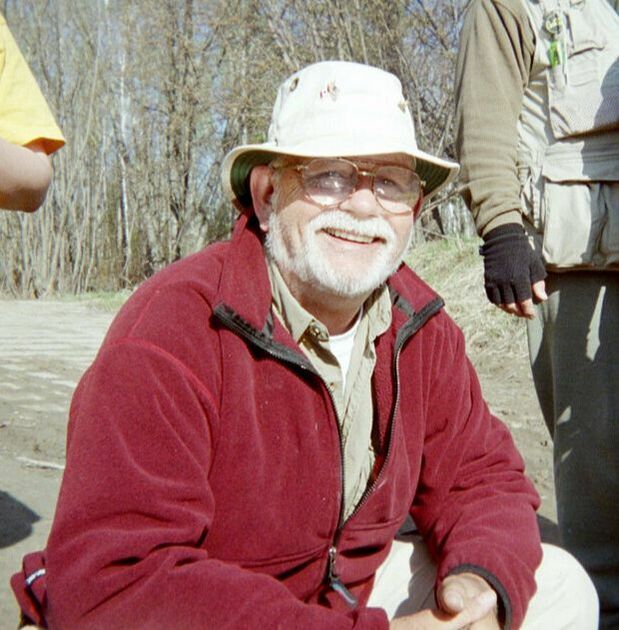 In 2001 they went over the Chain of Rocks....but that was during high flows.  That would not be a good idea at this time.
thanks
Kenton Spading
____________________________
​
Posted by Tony Swenson at 5:41 PM
I can't tell you want an experience it is to be with a group of people that are driven to a common goal. I'm truly honored to have met everyone on the team and had the great fortune to have been able to spend the first few days helping out with "Team Hope." Both Clark and Bob are so focused on achieving this goal that I am very confident that we will have a new record in the book at the end of May, but more important, we will have once again brought more attention to Rett Syndrome and Leukodystrophy.
​
I left the group last night at midnight and made it back to Blaine at 3:00 a.m., showered and jumped into bed and slept until 10:00 a.m. Then it was back to work for me at Noon today. Let me tell you, that's a little bit of culture shock.

I had a great time traveling (and being cold) with the road crew for the first two days. Like previous messages have noted, we kept very busy and got little sleep. I might have taken a few small cat naps, but since we got up on Saturday morning around 4:00 a.m. I only slept once for 3-4 hours. The paddlers only have been sleeping 3-4 hour stretches too, in fact Bob got his first nap after the Winnie Dam (around 11:00 a.m. Sunday) and Clark finally laid his head down in the canoe when they left Leech River at about 4:30 p.m. on Sunday.

Last night before I left both paddlers were feeling great and paddling strong. They left Grand Rapids sometime between 11:30 and midnight. They were treated to a dinner (TO GO) of fried chicken and a lot of encouragement from the road crew as they slipped into the night below the dam. Bob had mentioned that they would be paddling for a while and also taking some naps throughout the wee morning hours.

The road crew is also doing great. You wouldn't think there would be much to do, but THERE IS!!! It seems you are always rushing to the next meeting point. Everything is focused on making sure the paddlers are well clothed, well fed and stay on the water paddling as much as possible. Janet is just doing a fantastic job not only feeding Bob and Clark but also feeding the road crew. In fact the road crew is just doing a great job, I wish I would have been able to spend more time helping the effort.

It was great to have Verlen and Jenny staying with the road crew as we moved down the river. Verlen is so respected by both Bob and Clark it's an extreme inspiration to both of them to see Verlen at each meeting point. As Tammy noted in one of her messages, I just had a great time talking with Verlen and hearing his canoeing stories, what a great man!
I will be watching the web and waiting for TEAM HOPE to come through the Twin Cities sometime on Wednesday. 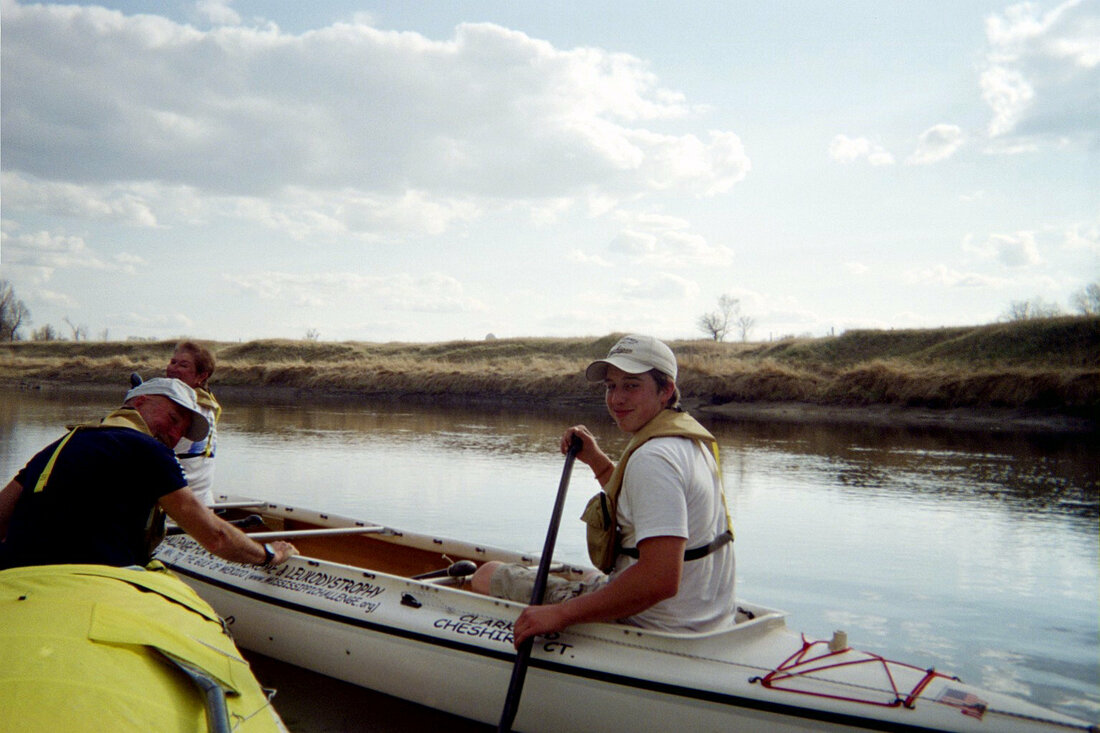 Below Jacobsen; L to R; Janet Bradford, Bob Bradford, David Phelps (Bob and Janet's Grandson), Mississippi Challenge for Rett Syndrome and Leukodystrophies, May 2003, May 12, 2003; Photo by Clark Eid
Posted by Dana Hanson at 7:23 PM
Stan and I were in the middle of our evening phone call and were close to the end of our conversation. Right at 7pm, Stan said "I gotta go -- they're here!" I sent my love to all and we hung up. "Here" is Palisade, MN. Tammy Hanson and group were going to provide a feast (fried chicken, baked beans, potato salad, and sundry other tidbits) for the paddlers and land crew in Aitken.

However, because they won't be arriving there until 11pm or midnight, she decided it was best to feed them earlier in the evening. Several people from the surrounding countryside were also arriving to cheer them on.

The paddlers had expected to take four hours to get from Big Sandy Recreational Area to Palisade. Guess it just wasn't meant to be..... They made it in 3-1/2 hours instead!!! And to make things even nicer, Bob's wife and grandson (Janet and Davey) paddled with them the entire way! Bob, for those who don't know, is a marathon canoe racer and has had either Janet or Davey as his paddling partner in several events. Nice to keep it in the family 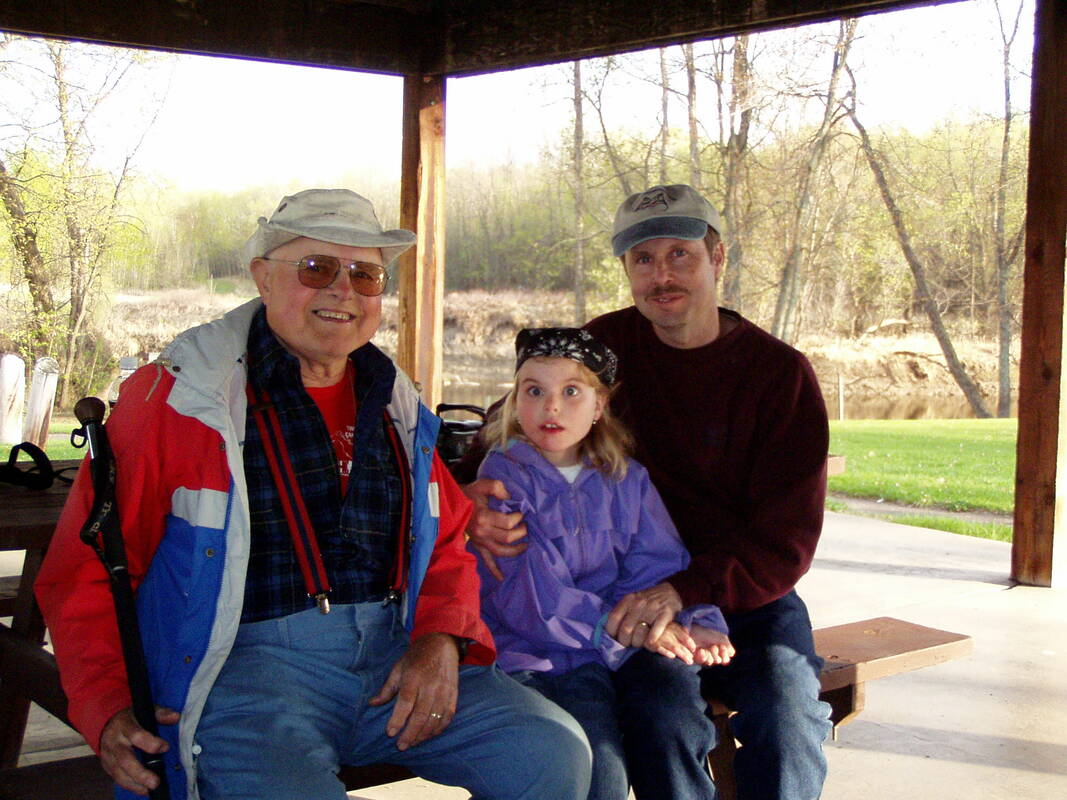 ​Posted by Tammy Hanson at 10:15 PM
We had another meeting with Team Hope this evening. We had planned on meeting them in our town of Aitkin for supper, but the timing was putting them in Palisade around meal time. Palisade is about 20 miles from us as the crow flies, but on the highway it is around 40 or so. We got into Palisade and headed for the campground right on the river thinking the road crew would be there was nobody there. We drove back to town to the "Pioneer Bar and Grill" where the owner was sitting at the bar, his name is Todd Dreher and had been in a picture with Bob and Verlen in the race 2 years ago. I called him earlier today to let him know they were coming through and he already knew about it. He said he planned to be down by the river later. After calling the road crew we went to the campground to set up some food for them and I drove up town for some last minute things. That was where I found Verlen and Jenny Kruger slowly going down main street looking for a 'home cooked meal'...........there is one cafe in town and they close at 3 in the afternoon, this is a pretty small town. It also happens to be the town where Verlen's logo from the race in 1984 is painted. Well, I told them that we had a bunch of food back at the campground and they headed back there. The road crew showed up shortly after and we all ate and enjoyed hearing the stories.
​
My husband's parents were there along with some neighbors and my daughter's (Rachel with Rett) aide from school was there also. We were expecting Bob and Clark sometime around 7:30 and sure enough at 7:00, my husband Bob saw them and we heard that famous "THEY'RE HERE"! Everyone jumps when they hear it and grabs for camera's right away. Janet and David were paddling along with them and looked like they were having a great time. They all got on land and Clark went right over to Rachel and got down on his knees to talk to her...............well, there is nothing more Rachel likes than to have a male paying attention to her..............this girl can flirt and she sure did then!! It was a really neat thing to watch and she was loving every minute of it.

We all had a wonderful time and they got back on the river at 8:00, it was a really peaceful night with the sun getting ready to set, the water was like glass.
Everyone seemed to be well rested and in good spirits.

End of Text Updates from our Race Web Log During the race May 12, 2003 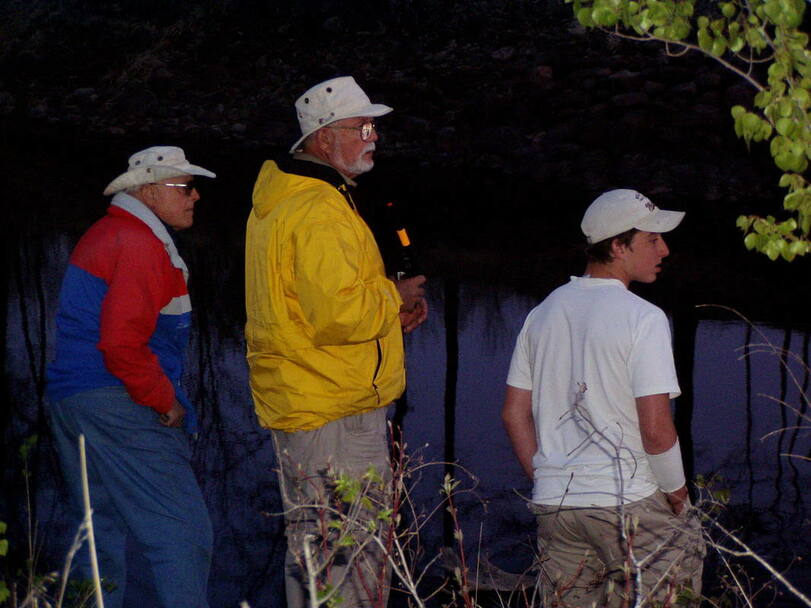