(BB) We arrived at Lock and Dam #5 in Fountain City at 12:30 am and the Lock Master said that we had about a 45 minute wait before locking through.  Clark was asleep so I tied off to some rocks above the lock.  I brushed my teeth, drank some coffee, and ate while a southbound tug locked its barges through.

(BB) We finally locked through L&D #5 on the right.

(CE)  I was back up after L&D #5 and we made clean run to L&D #5A in Winona, arriving there at 3:14 am.   We locked through and met our team at the Winona Boat Ramp about an hour later.  We continued to make good time through L&D #6 in Trempealeau and #7 in La Cross. 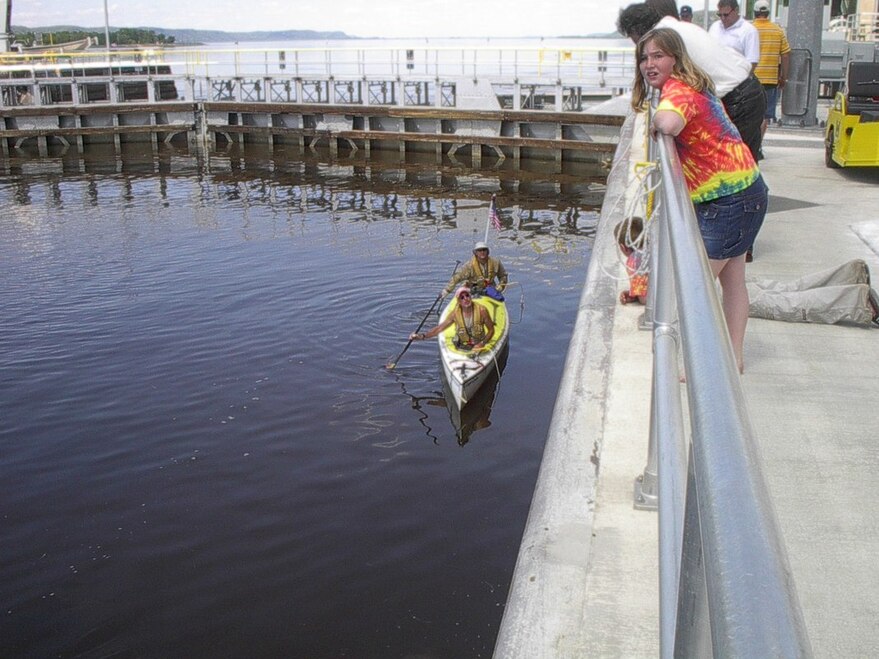 Lock and Dam 8, in Genoa WI, May 16, 2003; Bob Bradford in the front, Clark Eid in the back; Camera Used Angie Phelps; Angie's daughter looks at the camera; Mississippi River Challenge for Rett Syndrome and Leukodystrophy, May 2003
​(BB) Next we arrived at L&D #8 in Genoa, WI.  According to my schedule, we were 11 hours behind but according to the world record, we were still very much ahead of schedule.  At the lock, we met Gareth Stevens and Janet Perry waiting on the deck with our crew.  We pulled in below the lock at the boat ramp to fix up and bandage my thumbs, which were cracked from the weather.  We had decided that the ''New Skin" that I had been using was not good enough and that I should clean them up and apply antibiotic ointment and new bandages.  To my surprise, the Lockmaster-Ted Engeilen-had sent his attendant, Thomas Mattie, down with a first aid kit to fix me up.  Not only did he fix up my thumbs, but he also sent a whole box of supplies with the road crew so that they could continue to keep me in clean bandages.  Gareth and Janet said that they would meet us down river and paddle with us for a bit.
​
(CE) Bob's thumbs didn't look very good, and I was reminded of my 2001 partner Kurt's thumbs.  Kurt's became so bad that we had to resort to soaking them in hot salt water to drain the pus from the infection.  I had brought along a prescription antibiotic just for this occasion, and Bob started taking it.

​(BB) We passed Lansing, Iowa, in the late afternoon.  It was sunny and there was no wind.
​
(BB) At about river mile 658, five miles below Lansing, David (in Stan's Sea Wind) and Gareth and Janet (in their C-2) met up with us.  They had paddled upstream from Lynxville Landing.
​
(CE) It was fun having company again, and very enjoyable company at that. The conditions were great and Bob was able to take a nap in route to Lynxville Landing.  David was having a lot of fun racing ahead and waiting for us to catch up, then repeating this again and again.

​(BB) We all paddled together until we got back down to Lynxville Landing.  Well, Clark did, I was taking a nap.  Once arriving at the landing, I took a shower behind Stan’s trailer and we ate.
​
(CE) Lynxville Landing was beside a railroad track, and while we were there a train rushed by making a huge amount of noise.  I called Mary for the third time that day, and found out Amanda had an ear infection, and that was likely to have increased her seizures for the last few days.  I felt terrible.  My nose was still badly burned from the sun and wind, so Angie kindly gave me a tube of sunblock and lip ointment, which I kept with me for the rest of the trip.  We all talked on the satellite phone to Verlen, who had just arrived back to their home.  Stan also gave us some fleece caps that he had picked up from the local REI. 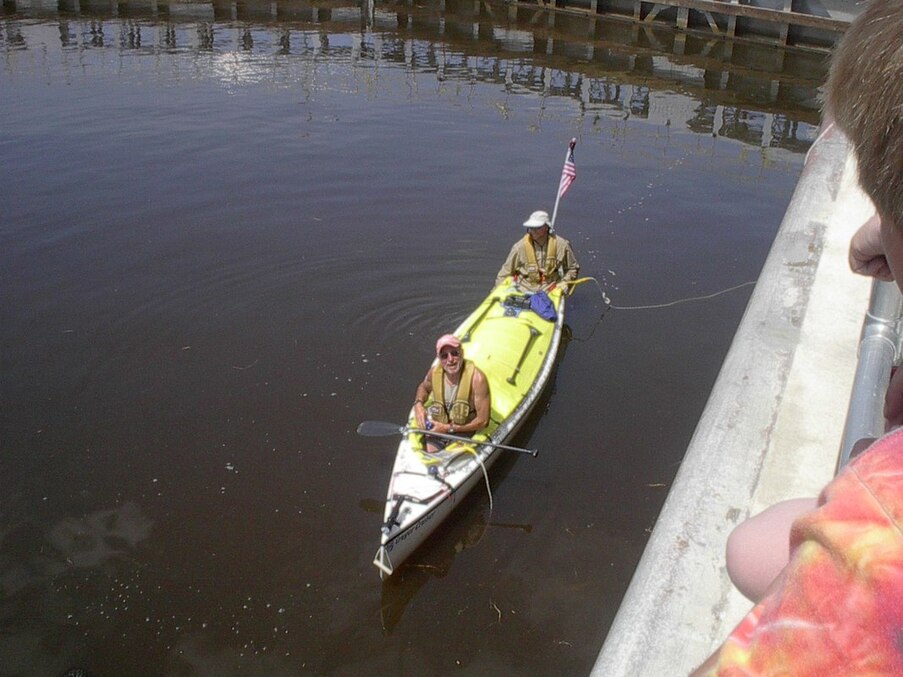 Lock and Dam 8, in Genoa WI, May 16, 2003; Bob Bradford is in the front, Clark Eid always sits in the back; Camera Used Angie Phelps; Mississippi River Challenge for Rett Syndrome and Leukodystrophy, May 2003
(CE) I moved the battery pack that hung from the center rib in front of me to behind the rear seat, giving me more sleeping room and preventing me from accidentally bumping the power plug.  The crew would move downstream to L&D #10 because there was no access to L&D #9 because of construction going on there.  The audio recorder was turned on and we left around 9 pm.

(CE) In route to the next L&D, Bob and I could feel the heat rolling off the hills onto the water.  Bob also found out that there was a third, higher setting on the headlamps I had modified, which wasn't the easiest thing to figure out.  We also talked about the need for sleep verses the need for us both staying up to paddle at night.  In the end, we decided that we would just have to be careful and call it as it came.  The road and railroad went followed the river in this section and it was noisy until we reached the L&D #9.

(BB) Just before we headed back out, some drunk came by and warned us that it was going to rain and that the landing would be flooded.

(BB) At L&D #9, the attendant that gave us the rope was a lady.  She asked us our mission and when we told her, she asked us to hold on for a minute. She returned with a paper bag clipped to a pole which she held down to us.  In it there were some treats.  It looked like it may have been part of her lunch. Clark ate the sunflower seeds and liked them so much that he had Stan pick him up some more for the days that followed.

(CE) We were a little confused about where the entrance to the lock was located because of all the construction going on.  It was 9:35 PM when we entered into the lock, and watched lots of bats flying around eating bugs.  A lady employee named Chris Craig came over and asked what we were doing. We told her and she asked if she could donate some candy bars.  How could we tum her down?  She came back and handed us a snack bag using a pole.  It had an assortment of goodies, and included a half opened bag of sunflower seeds, a zip-lock of red twist, and a couple of candy bars. Bob wasn't a fan of the sunflower seeds, so I ate them and promptly got addicted. The total drop was about a foot in the lock.  There was no moon, making it very dark as we departed. 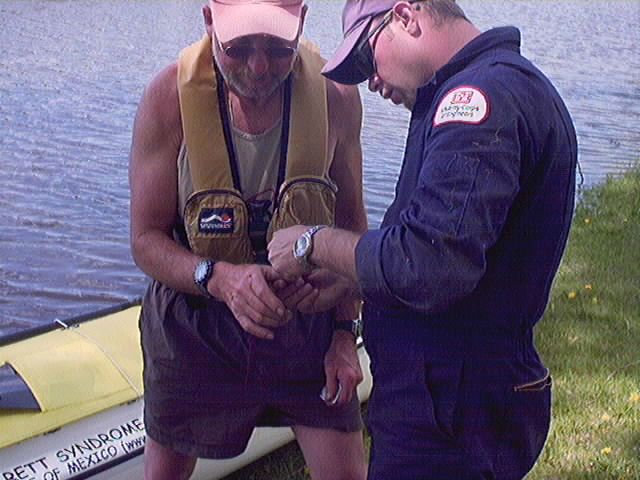 Bob Bradford gets his thumbs fixed up ... Genoa, WI - Lockmaster at L&D 8 -Ted Engeilen - had sent his attendant, Thomas Mattie, down with a first aid kit to fix me up. Not only did he fix up my thumbs, but he also sent a whole box of supplies with the road crew so that they could continue to keep me in clean bandages. ; Photo by Lisa Evert; Mississippi River Challenge for Rett Syndrome and Leukodystrophy, May 2003
(CE) The water was calm and the temperature just right. We still were using Bob's replacement bow light instead of the NiteRider, which we planned to pick up the following day. We couldn't see an expected channel light but were able to search out the cans.  The Poly Bay Light (red) finally came into view, and we were not sure why we couldn't see it earlier.  We went close enough to it to hear the frogs, then veered left toward where the Gordon Bay Light should be, but never showed up.  Then we searched for the Jackson Island Light on river right, and noted that we still didn't have any river traffic.
​End of Bob Bradford and Clark Eid - Paddler's Log  Friday, May 16th, 2003 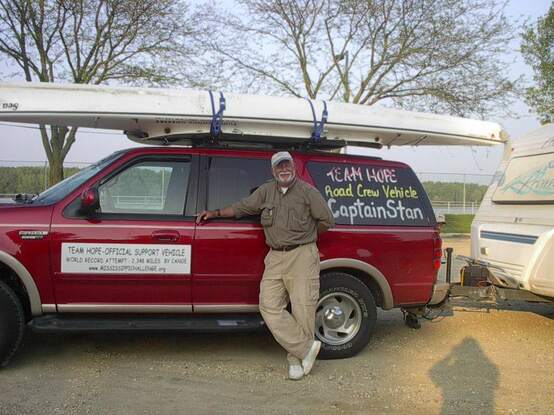 Road Captain Stan Hanson, in front of his sporty "newly fixed" Ford Explorer, with our official race crew vehicle sign as well as Angie Phelp's window work ; Camera used: Angie Phelps; Mississippi Challenge for Rett Syndrome and Leukodystrophy May 2003
Sounds like the road crew is holding up well overall. That is a rough job for the road crew who do a great deal of work, and spend much anxious time waiting for the paddlers. Special thanks to the road crew! Clark said the food has been incredible and the road crew has been great.

I told Clark the website maps from Where Are They Now? were once again updating very quickly and often now. Special thanks to all who helped with that.

When I look at the Where Are They Now Page, it shows the team is almost at the Iowa border and moving quickly. Looks like Dubuque is the next "big" city on the map.... I hope the storms in tornadoes in the midwest are quiet tonight - I will check the National Weather Service next.

Posted by Mary at 1:47 PM
Flood Statement for Dubuque, Iowa area:
FLOOD STATEMENT...CORRECTION TO INFORMATION FOR DUBUQUE DAM 11
NATIONAL WEATHER SERVICE QUAD CITIES IA IL  1215 PM CDT FRI MAY 16 2003
...FLOOD WARNINGS CONTINUE FOR THE WAPSIPINICON RIVER NEAR DEWITT...THE CEDAR RIVER NEAR CONESVILLE...AND THE IOWA RIVER AT MARENGO...WITH HIGH WATER EXPECTED ON THE MISSISSIPPI RIVER...AS WELL AS THE WAPSIPINICON AND IOWA RIVERS...
HEAVY RAINS OVER THE PAST COUPLE OF WEEKS HAVE LED TO RISES ON AREA RIVERS.

Posted by Mary at 2:18 PM
Clark just called 2:15 PM CST, they are literally at Lock and Dam 8, in Genoa. Moving well, current is good, weather is good... Bob's finger is infected but he's ok.... I spoke to Janet briefly, she sounded great and said they are all running their tails off :-). They all sound great though, I could hear the kids in the background, and spoke to Chuck Evert (rett dad) briefly....More in a minute, I have to get Noah off the bus....

Today the guys bought "stuff" for Clark & Bob at Cabella's. Stan is in hopes that the ladies were able to get all the laundry done while the gents did their shopping.

Then when they approached Lock & Dam 9, the lockmaster told them that due to construction, they couldn't access the river from there. They'd have to go downstream a few miles to a nice campground that had good access to the river. But when they got down there, the campground was flooded. Back to L&D 9 they went. The lockmaster then told them to try upriver 3 miles in Linksville. So that is their new meeting spot. Three miles upstream from L&D 9. Stan feels there's no way the paddlers could slip by them without seeing them -- unless, of course, they somehow arrive in the middle of the night

Suddenly Stan shouts "There they are!" But this time he's referring to the other support crew vehicles! He's getting concerned about when Angie leaves, because she's been such a great asset to the support team. Really knows her stuff.

If they get to Guttenburg this evening, they've been told they have a lasagna dinner and hot tubs waiting for them! Kinda makes me wish I was there, too!

Unfortunately, it's beginning to look like they won't be arriving in St. Louis until sometime in the evening on Tuesday -- possibly even as late as midnight. The cheering that we looked forward to at the base of the Arch may be much less than we hoped for. We'll have to see once they get closer to St. Louis.
Dana