New Orleans Morial Convention Center 2006-17 The museum quality display case uses the following materials: You can see the kokatat dry suit (blue and yellow) needed at the beginning vs. the much lighter weight material/outfit used when the paddlers were further south... The Double Helix has the "bubble top" on it that was placed over a paddler when one paddler would sleep and one would paddle. Lexan sheets, kindly donated by DuPont. Bosch Aluminum Structural Framing System, kindly donated by Bosch Rexroth USA.
The Double Helix kayak is a one of a kind museum quality kayak that was hand built by Clark Eid in honor of his daughter, Amanda Eid, and all of those who have Rett Syndrome, to serve as a the flagship for the 5 team Great Mississippi River Race for Rett Syndrome, May 2001.

The Double Helix was paddled by Clark Eid ( Amanda Eid's father, and chairman of this charity event) and Kurt Zimmermann during the race. ​ 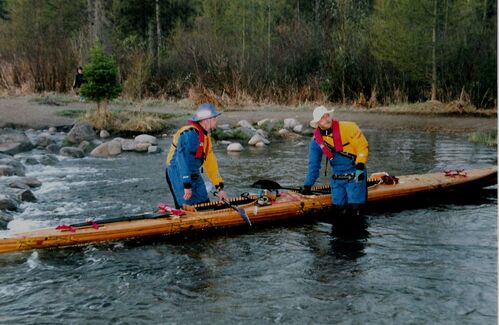 L to R Kurt Zimmermann and Clark Eid at the headwaters of the Mississippi River near the start, Great Mississippi River Race for Rett Syndrome, May 2001
Where is the Double Helix today?
The Double Helix exhibit is displayed at the very contemporary Tunica River Park & Museum on the Mississippi River.   This exhibit is the gift of Clark Eid and Mary Potter and friends, in honor of their daughter Amanda, who has Rett Syndrome.    Located at 1 River Park Drive in Tunica, MS, the museum offers visitors multiple interactive attractions to explore and understand the rich history of teh Mississippi Delta and America's greatest river.

Race Event:
The Great Mississippi River Race for Rett Syndrome, May 2001
Course: 2,348 miles of the Mississippi River
Teams: Team Kruger (1st), Team Double Helix (2nd), Team Alaska (3rd), Team Amazons of the Mississippi and Team Rebels
Format of Race: Nonstop from beginning to end (World record for Longest Canoe/Kayak Race in History)
The race was officially sanctioned by the United States Canoe Association and American Canoe Association.
All team member agreed to follow the Rules and the Safety Program.
Teams paid or donated $2500  per team to participate in this event, and that full amount was donated to the Rett Syndrome Research Association.
The race was coordinated with the help of the Coast Guard (Safety Officer Elizabeth Tynan) and Army Corp of Engineers (Kent Spading). 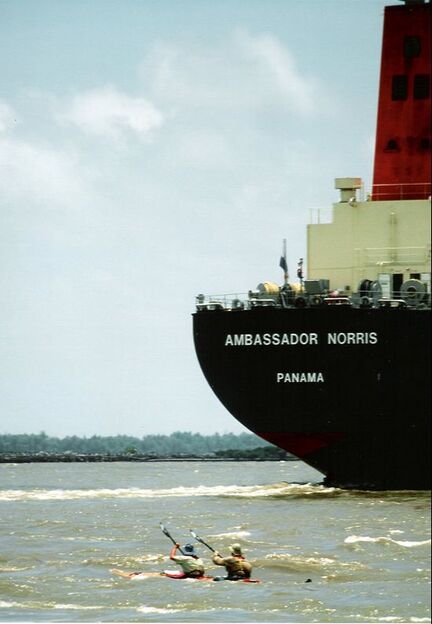 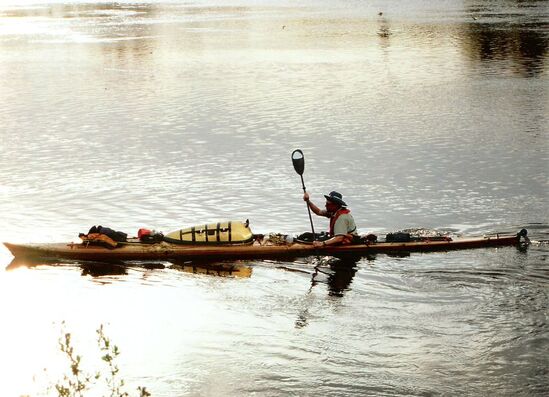 Kurt Zimmermann paddles while Clark Eid sleeps under the dome, Great Mississippi River Race for Rett Syndrome, May 2001
​Race Results:
In true "Survivor" form, two teams of undaunted paddlers finished the longest non-stop canoe/kayak race in history when they arrived at where the Mississippi River enters the Gulf of Mexico, ending an epic journey of 2,348 miles that encountered everything from exhaustion to some of the worst flooding on record.
- FIRST PLACE - Team Kruger, led by the renowned Verlen Kruger and Bob Bradford, placed first in their specialized Kruger canoe at 24 days, 17 hours, 51 minutes.
- SECOND PLACE - Team Double Helix, featuring the event's unique hand built cedar stripped flagship kayak called the Double Helix, placed second at 26 days, 6 hours, 40 minutes, a world record for fastest time in a kayak to run the Mississippi River.
THIRD PLACE Team Alaska, showing true perseverance and dedication, replaced a kayak after it was lost in a harrowing rapids in Minnesota and stayed in the race!  Team Alaska remained on the river until May 31 and pulled out at mile marker 707.
- Team Rebels with a Cause made a gallant effort but had to withdraw from the race after the first week May 13, 2001.
- Teams Amazons of the Mississippi made a heroic effort but had to withdraw May 12, 2001 due to a paddler's medical emergency.

Most importantly, participating teams and families from across the world raised awareness of Rett syndrome in the general and scientific communities while raising funds to find a cure. A marathon of research, echoing the demands of this epic journey, is our best hope for our children's future.

Team Double Helix near Mile Marker Zero, Official End of the Mississippi River, L to R Kurt Zimmermann, Clark Eid; Fastest time down the entire Mississippi River in a kayak; 2nd place in the Great Mississippi River Race for Rett Syndrome, May 2001
This Charity Event
Clark Eid and Mary Potter, organized this charity event to raise public awareness of Rett Syndrome, a devastating neurodevelopmental disorder affecting their daughter Amanda. This event and flagship embody determination, echoing the marathon of scientific research needed to reach a better tomorrow. The clock is ticking for those who suffer from Rett Syndrome! Recent scientific breakthroughs have given new hope to those who suffer from Rett syndrome.

The Double Helix and Rett families at Pat Fay's annual Rett get together in CT, 2001, prior to the race. Amanda is sitting in the middle with the "OS" on her shirt, short for BOSS, in front of her mom, Mary Potter. Kurt Zimmermann (paddler) is in the upper right corner. Noah Eid is the child sitting on the Double Helix to the far left in the green shorts and blue shirt.