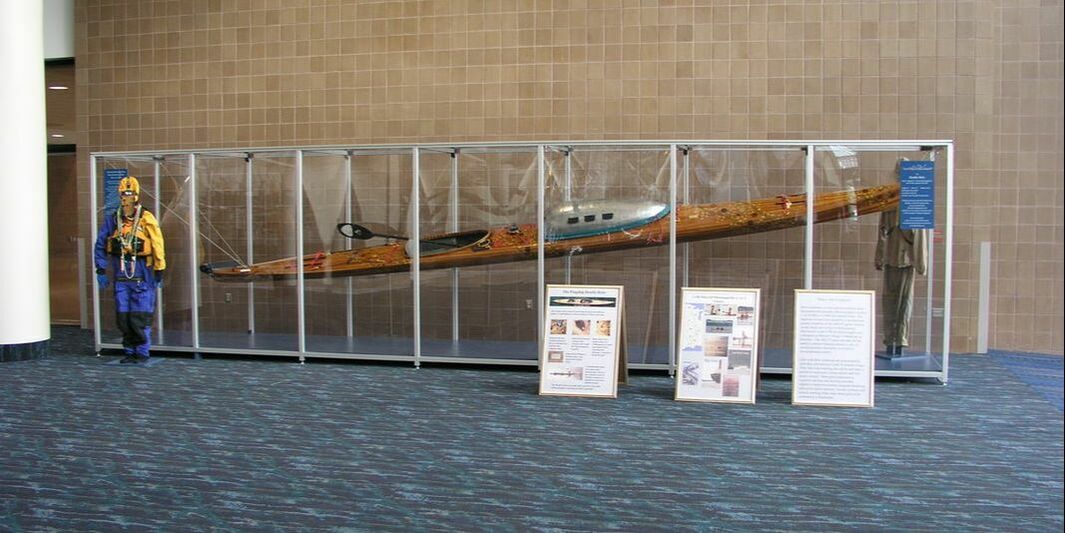 New Orleans Morial Convention Center 2006-17 The museum quality display case uses the following materials: You can see the kokatat dry suit (blue and yellow) needed at the beginning vs. the much lighter weight material/outfit used when the paddlers were further south... The Double Helix has the "bubble top" on it that was placed over a paddler when one paddler would sleep and one would paddle. Lexan sheets, kindly donated by DuPont. Bosch Aluminum Structural Framing System, kindly donated by Bosch Rexroth USA.
Press Release: August 2019, by Clark Eid

The Tunica RiverPark Museum, located at 1 RiverPark Drive in Tunica, MS, offers visitors multiple interactive attractions to explore and understand the rich history of the Mississippi Delta and America’s greatest river. We proudly announce our newest exhibit featuring the kayak Double Helix. This one-of- a-kind water craft was the flagship for the longest non-stop paddling race in history called the “2001 Great Mississippi River Race for Rett Syndrome” (www.BeyondTheFinish.org) and holds the time-record for a kayak to run the entire 2,500 miles of the Mississippi River. The Double Helix exhibit is the gift of Clark Eid and Mary Potter in honor of their daughter Amanda, who has Rett Syndrome.

The Double Helix was designed as a functional piece of art to heighten awareness of the rare disease Rett Syndrome. It was constructed using more than 100 different woods and aerospace materials. A mural of two rose vines wrap around the hull made from several thousand pieces of wood veneers. This mural mimics DNA and can be deciphered to read “Amanda’s Dream Keeper” which prompted the Nobel Laureates who discovered DNA’s structure to sign the craft.  Further unique details include a GPS holder made with woods from Jacques-Yves Cousteau’s Calypso, a compass ring using woods from the La Amistad replica in Steven Spielberg’s 1997 movie, and a submersible sleeping pod used for the 24/7 ultra-marathon, all-conditions race.  Other features include 100+ types of exotic wood, fiberglass/aerospace carbon fiber lamination, titanium stems and a submersible cockpit dome for sleeping.

Human powered racing records for running the entire Mississippi River began in 1925 and continues to this day. The Double Helix display will serve as a magnet to attract other items from past and present record holders to expand this exciting theme for our visitors. Clark Eid, also co-holder of the current Guinness World Record set in 2003 with Bob Bradford for the overall time record for paddling the Mississippi River, will assist with this future effort.

The Tunica RiverPark  Museum extends it thanks to the Bluff City Canoe Club of Memphis and Boy Scout Troop 455 of Lakeland, TN for their assistance in transporting the Double Helix to its new home.

The Double Helix  cedar strip kayak was built by Clark Eid in honor of Amanda Eid and all of those who suffer from Rett syndrome and served as a the flagship for the Great Mississippi River Race for Rett Syndrome, May 2001. The Double Helix was paddled by Clark Eid ( Amanda Eid's father, and chairman of this charity event) and Kurt Zimmermann during the race.

This event was the world's record for the longest non-stop Canoe/ Kayak Race.  Sanctioned by the ACA and the USCA.  Record flooding challenged five teams.  Verlen Kruger and Bob Bradford of Team Kruger won 1st place at 24 Days, 17 hours, and 51 minutes (in a Kruger Canoe).  Clark Eid and Kurt Zimmermann of Team Double Helix won 2nd place and set unofficial kayak record of 26 Days, 6 Hours, and 40 Minutes.   Today, the Double Helix is publicy placed at the Tunica Museum, Tunica, MS (located on the Mississippi River) so that we can continue to raise awareness of Rett Syndrome to the general public.

Special Additions
​Prior Placements/Exhibits
Early 2018 - Bass Pro Shop at the Pyramid, Memphis, TN.
Special thanks to David Hagel, Bass Pro Shops General Manager, Andy Sziraky & Boy Scout Troop 455 of Lakeland, TN, and the Bluff City Canoe Club for bringing the Double Helix to the Memphis area.
2006-2017 New Orleans Ernest N. Morial Convention Center - We remain eternally grateful for the long placement that the Double Helix enjoyed at this world renowned convention center.   Thank you!   The Double Helix was in storage at the Convention Center when Hurricane Katrina hit and survived the devastating ransacking at the Center.   The crate had been ripped open and some race banners and clothing were stolen,  but the Double Helix was not removed/stolen.   Crates all around were opened and damaged as well. ​   A few months after the hurricane, Clark Eid and his son Noah went to the Morial Convention center to help set up the display.   The staff at the convention center did the bulk of the work and were extremely gracious.

The Double Helix displayed at Bristol Myers Squibb, Wallingford, Ct prior to the race, 2001 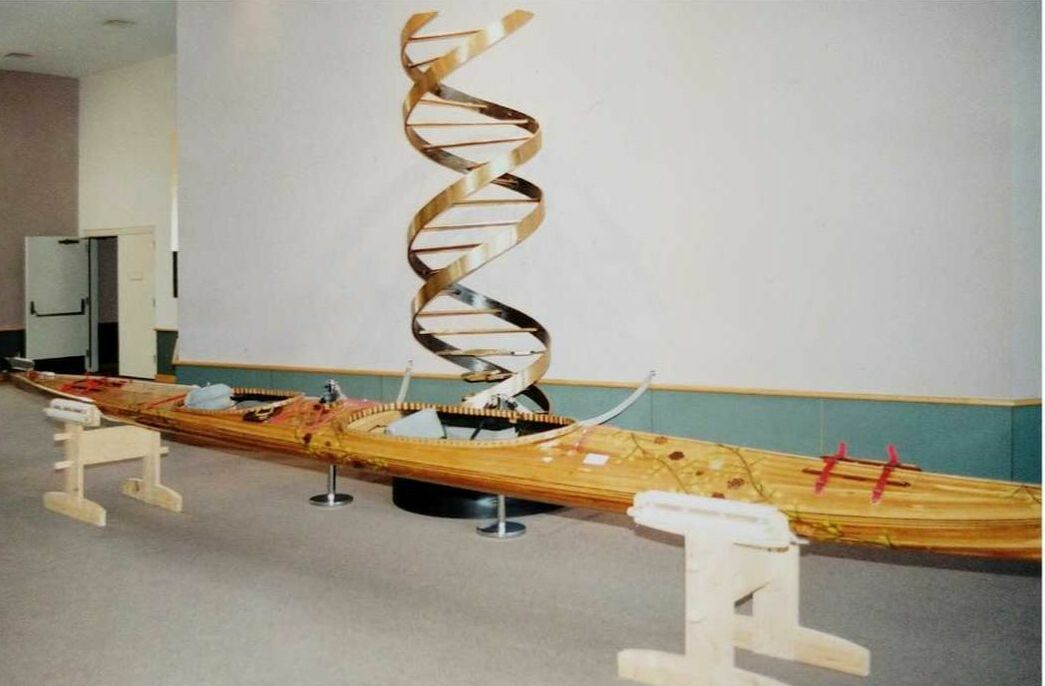 The Double Helix with another Double Helix, at Cold Spring Harbor Laboratory, 2001, Dr. Watson signed the kayak shortly after. 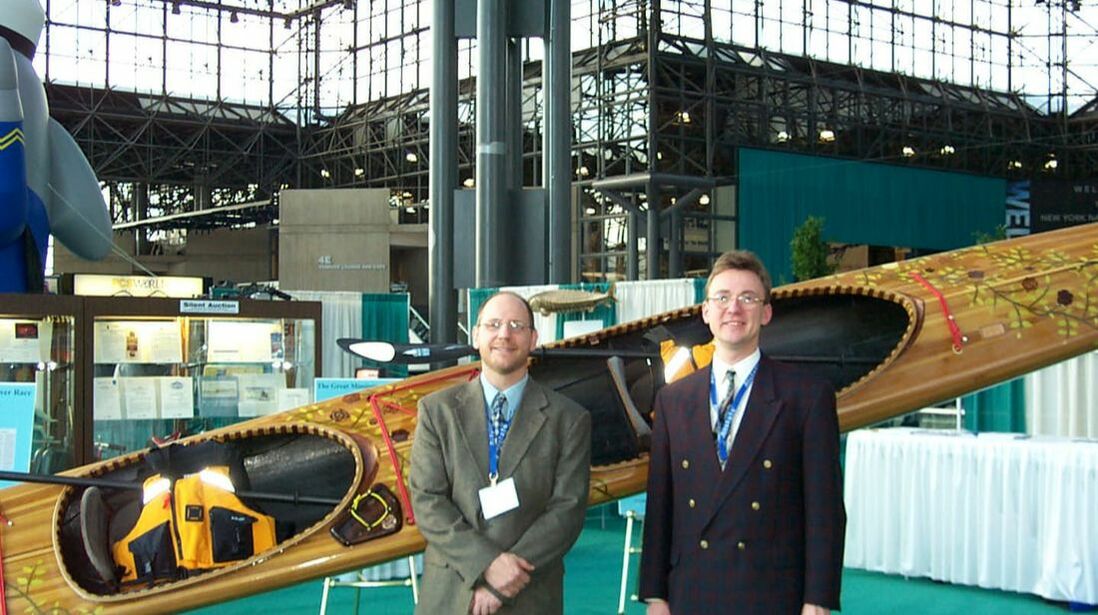 The Double Helix and Rett families at Pat Fay's annual Rett get together in CT, 2001, prior to the race. Amanda is sitting in the middle with the "OS" on her shirt, short for BOSS, in front of her mom, Mary Potter. Kurt Zimmermann (paddler) is in the upper right corner. Noah Eid is the child sitting on the Double Helix to the far right. 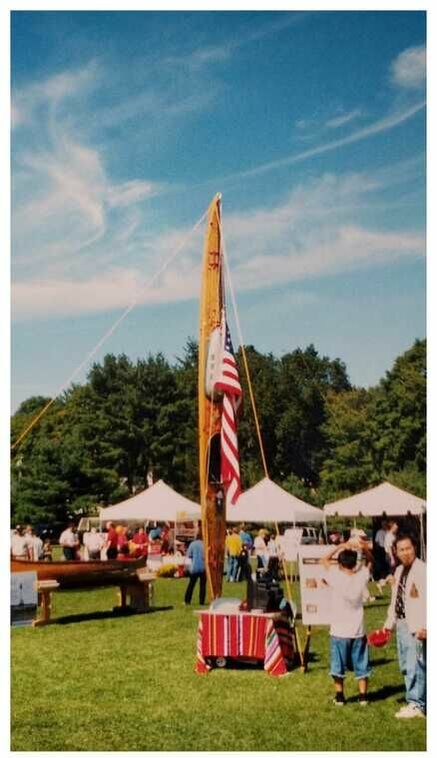 The Double Helix at the Cheshire Fall Festival, Cheshire, CT, 2000