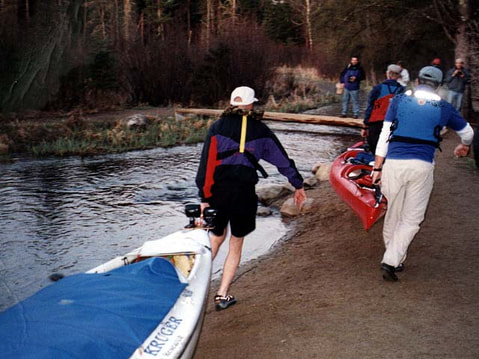 Team Rebels is walking in front with the red kayak, followed closely by Team Kruger (Bob Bradford is carrying the front of the Kruger canoe), May 5, 2001.
The Start!
Mary Potter's (Webmaster) notes based on conversations with Stan Hanson and Clark Eid....
​
The world's longest non-stop kayak/canoe race began at the Mississippi River Headwaters in Itasca State Park, MN on May 5, 2001 on a Saturday morning at 6 AM and ends when all teams have crossed the finish line at Mile Marker 0 south of New Orleans, or May 31, midnight, 2001.

​Team Rebels with a Cause drew first position, Team Alaska MSC second, Team Kruger third, Team Double Helix fourth and Team Amazons of the Mississippi by default  was in the fifth position (they did not draw).   Team Amazons did arrive shortly after the race began (within minutes).

​Steve Landick, Race Director, "started" the race May 5, 2001 at 6 AM sharp  with an environmental friendly "bang" from blown up paper bag.

​Stories and race pictures indicate that shortly after the start, all teams portaged around a log that was about 10 feet from the start.
​
​Team Kruger got in the water first and quickly took the lead, followed by Team Rebels, Team Double Helix, Team Alaska MSC and Team Amazons.   Only 2,348 miles to go!

MISSISSIPPI RIVER Excerpts From the National Parks Services (2018):
The Mississippi River is the second longest river in North America, flowing 2,350 miles from its source at Lake Itasca through the center of the continental United States to the Gulf of Mexico.  The reported length of a river may increase or decrease as deposition or erosion occurs at its delta, or as meanders are created or cutoff.

​To get a better "detailed" idea of the where the paddlers started, you can look at river charts of the Mississippi River in Minnesota from the MN Department of Natural Resources.   The first map/chart is "Map 1,  Mississippi State River Trail Lake Itasca to Cass Lake

Note that river miles start around 1341.6 on this chart and count down initially.  River miles change much later as rivers intersect.    The charts we used were from 1990 and may vary from the charts that you see today.  Rivers change over time, and new maps/charts may differ over time. ​ 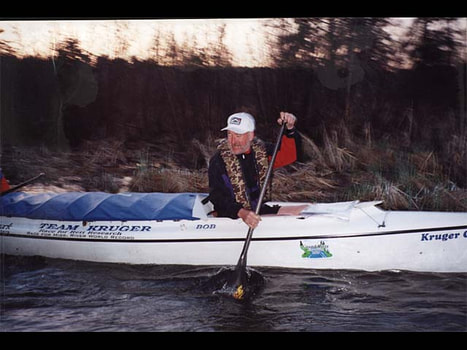 Team Kruger quickly takes the lead. Bob Bradford pictured, Verlen Kruger is in the back, May 5, 2001 Saturday
Team Kruger - From Bob Bradford's Daily Log, Enhanced by Stan Hanson:
The Night before and the Start, May 4, 2001

​May 4, 2001
The night before the race, we met at the lodge on Lake Itasca where we were all introduced to the other racers.  There were five teams in all: Team Amazon, Team Alaska, Team Rebel, Team Double Helix, and Team Kruger.

The Rebels and the Alaskans were relay teams but the other three would be made up of two members in each team.  All of the teams were using kayaks, except Team Kruger.  On May 5, 2001, our team was the first to arrive at the site, but not without excitement!   We had put all of our gear inside of our canoe the night before.  We also put the spray skirts on for the race. 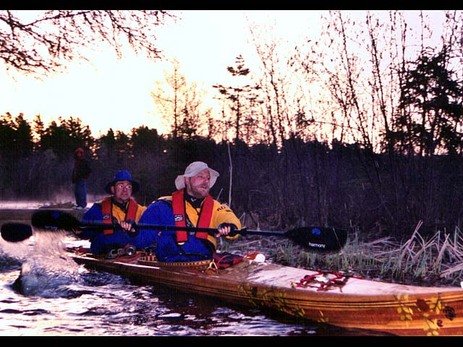 Team Double Helix are in right after the Rebels, Kurt Zimmermann in the back, Clark Eid in the front
Team Kruger - From Bob Bradford's Daily Log, Enhanced by Stan Hanson:
May 5, 2001
​
On May 5, 2001, our team was the first to arrive at the site, but not without excitement! We had put all of our gear inside of our canoe the night before. We also put the spray skirts on for the race. All we had to do this morning, was to load the canoe on the car racks in an upright position so the gear wouldn't fall out. The trip was only three miles from our camp, so that wouldn't be a big deal.

Thank goodness Kruger canoes are built tough. As we slowed to make the left turn to the parking lot, where the race was to start, the canoe shot off the roof and landed in front of the car. It hit the pavement with a loud crash! We pulled the canoe the rest of the way on the Heavy Duty Paddle Boy. There had been no damage to the canoe. 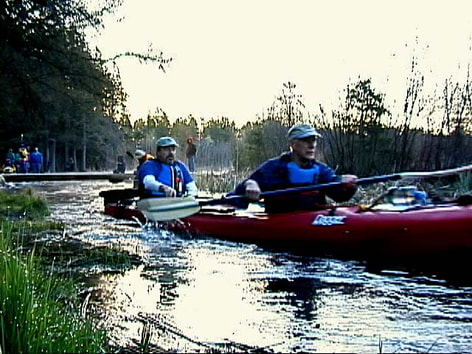 Team Rebels With a Cause, Eric in the back, Carl in the front, quickly take position 2
​At the race starting site, we checked and re-checked all of our gear. It would be a half hour before any of the other competitors arrived.

​I made at least five trips to the woods for a bathroom break. Even though I had been careful to hydrate myself, I think it was just the excitement. I noticed Verlen appeared calm.

​Spectators began to appear, some with daughters that had Rett Syndrome.  Cameras were flashing and people were asking us questions, like how will you be able to go that long in a boat? I wasn't sure, but I knew Verlen had to know what it would take.
​
Clark Eid said it was time to draw straws to see how we would line up. The Mississippi is only about 12 feet wide at its beginning. It starts at Lake Itasca, where a small rock dam allows water to flow out of the northern end of the lake. I drew the third position for us.
​ 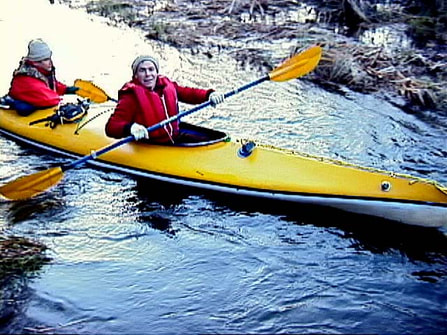 Team Alaska at the start, May 5, 2001, L to R David Hoffman, Tony Degange, starting 4th
​We had talked a lot that spring about how we would have to pace ourselves. I had been mostly a racer, and Verlen had been both a racer and a voyager.  As Verlen told me later, ''This isn't a race, it's survival!!"

It was almost race time. All of the teams were there, except Team Amazon.

The bows of our watercrafts had to be touching the water at the start.  Ten yards downstream there was a log across the river.  It was only a foot above the water so our plan was to pull the canoe up out of the water and portage around the log as soon as the gun went off.  Verlen and I had scouted at least six hours' worth of the Mississippi River during the previous four days. We knew exactly where we wanted to go in the first twenty miles.  I knew we should try to get out in first place, if possible, but only if we didn't expend too much energy.

​​Our canoe was only 18 feet 6 inches.  Most of the kayaks were over 21 feet. We would have an advantage for at least the first 30 miles of the race because of the tight, twisty nature of the river. 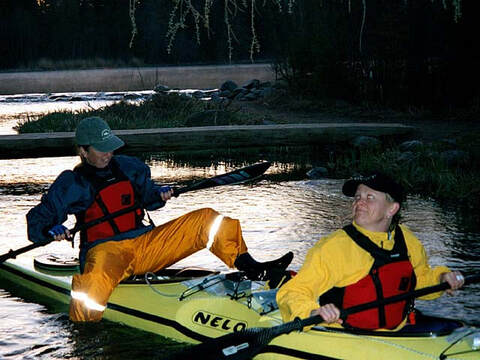 L to R, Meghan Duffy and Cynthia Belbin at the start, May 5, 2001
When Steve Landick started the race, no one seemed to be in a hurry. No one wanted to lead the race. We did, and it was time to make our move. Verlen would be in the back and I in the front. That would be our positions the entire race. We made the short portage and jumped back into the canoe ahead of the other teams.

I remember turning to the race starter, Steve, and asking what we should do now. After all, we had drawn the number three position. Steve grinned and said, "This is a race, Bob!"

As we turned the first corner, I turned to Verlen and said, "Are you having fun yet, Verlen?" He replied, "It doesn't get any better than this!" As the next 24 days would pass, I would ask that same question several times, and Verlen would give me the same response. 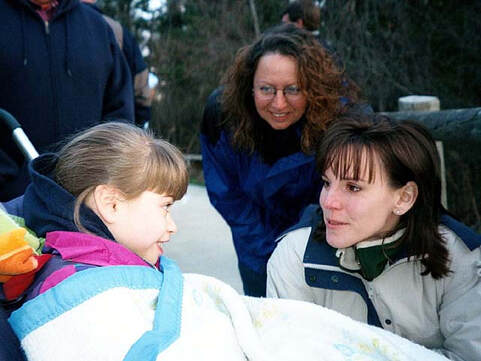 The Great Mississippi River Race for Rett Syndrome officially started today! We were there with our daughter Rachel, 7 and 5 other Rett families from Minnesota including a set of twins.

Last night we met with the 5 groups of race teams and had a spaghetti dinner. It was a real moving experience to be there with so many people knowing we were there for Rett Syndrome. There were about 80 of us there!

​The racers took off at 6:00 am this morning, and it was 37 degrees out, but we had a huge crowd to cheer as they took off down the river!

We made a huge banner to have at the headwaters that said good luck to the racers and crews. All of us that were there have signed the banner and they took it with them in hopes to have other people they meet along the way sign it as well. It will be a great keepsake when it is done! Bob, Tammy, Rachel and Andrea Hanson Aitkin, MN

​From Dianne, Danita Baker's mom (Danita has twin girls with Rett syndrome)
Dianne reports very chilly weather this morning at 6:00AM as she and several local families and the Planning Committee member were standing by top see the teams off!
May 5, 2001, Sat