- SECOND PLACE - Team Double Helix, featuring the event's unique hand built cedar stripped flagship kayak called the Double Helix, placed second at 26 days, 6 hours, 40 minutes.   Special significance of the Double Helix  includes a representation of Double Helix DNA in a wood rose vine that can be decoded to spell "AMANDA'S DREAMKEEPER". Clark's daughter, Amanda, has Rett Syndrome.   The Double Helix was built in honor of Amanda Eid and all of those who have Rett Syndrome, to serve as a the flagship for the Great Mississippi River Race for Rett Syndrome, May 2001. The Double Helix was publicly placed at the world-class Morial Convention Center in New Orleans from 2006 to 2017.    It was later moved to the Tunica River Park and Museum, in Tunica MS - so that we can continue to raise awareness of Rett Syndrome in the general public. ​

THIRD PLACE Team Alaska, showing true perseverance and dedication, replaced a kayak after it was lost in a harrowing rapids in Minnesota and stayed in the race!  Team Alaska remained on the river until May 31 and pulled out at mile marker 707.    Team Alaska supplied both kayaks used during the race.   The first one was eventually found by local police, and returned to Team Alaska when they headed home and stopped in Minnesota to pick it up.  Alaska also conducted a scientific survey on plant and animal life as they traveled during the race! Several members of the Alaskan team completed a trip down the Mississippi river in 1999 as well. 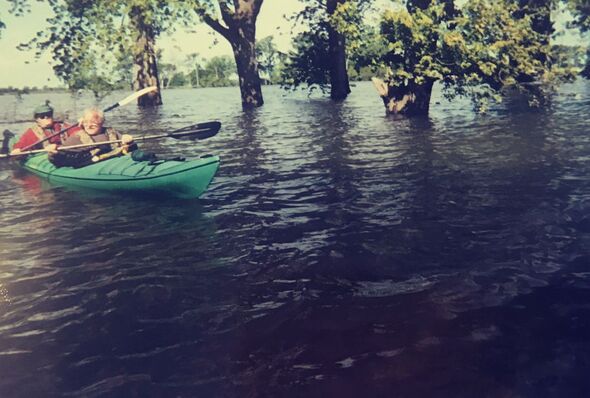 Kermit and Bud.
- Team Rebels with a Cause made a gallant effort but had to withdraw from the race after the first week May 13, 2001.  Days before the race began, the 4th member of the team dropped out, leaving only 3 members, one vehicle, and the race kayak and gear.   Towards the end of the first week, one member left the race, and the team disbanded.   The remaining team members Al Levine and Eric Kocher then joined Team Alaska and continued with them for the duration of the race.   Team Rebel's kayak was donated by Dagger and later sold by Carl Johnson to raise additional funds for Rett syndrome research! 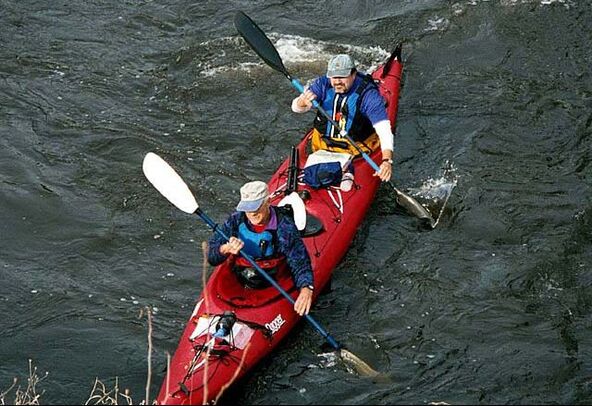 - Teams Amazons of the Mississippi made a heroic effort but had to withdraw May 12, 2001 due to a paddler's medical emergency.  This was the only female team to enter (and an International team at that!).    Team Amazon's kayak was donated by Nelo. 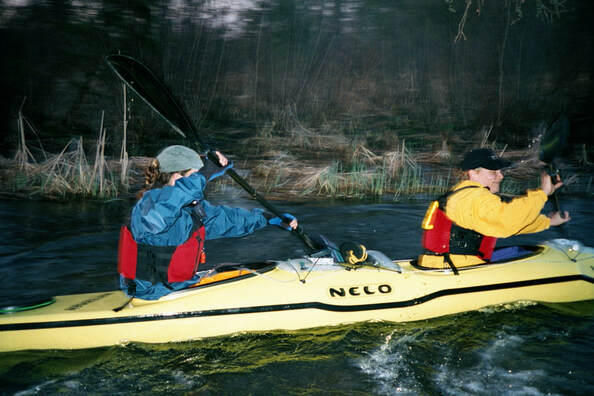 Most importantly, participating teams and families from across the world raised awareness of Rett syndrome in the general and scientific communities while raising funds to find a cure. A marathon of research, echoing the demands of this epic journey, is our best hope for our children's future.

Records Set During this Ultra Marathon Race
Sanctioning, Waivers, Medical Clearance, Rules & Safety Agreement, Officials/Officers, Insurance, Donation to Rett Syndrome Research
The race was officially sanctioned by the United States Canoe Association and American Canoe Association.    As such, a safety program and rules were in place during this event and followed by all team members at all times.   Safety, above all remained our first priority at all times.

All Team members signed an "Amateur Athletic Waiver and Release of Liability".    This waiver was required by the United States Canoe Association for participation in this event.  Official team members signed waivers, agreed to appear in this event free of charge, and provided a medical clearance form.   There were teams and team members who could not get a medical clearance and who were not allowed to join the race.

The Safety Officer, Race Consultant, Medical Officer, Judges,  and Time Keeper were selected prior to the race and could not be modified once the race started.

All team member agreed to follow the Rules and the Safety Program.   Our sanctioning and Insurance policy was based on the this organization/protocols.   All information, rules, safety program, officers, waiver, and more were set prior to the race and online and available to everyone participating.       Each team paid a small insurance fee for each team member as part of our agreement to keep sanctioning.   Any overage was donated to the Rett Syndrome Charities.

Additionally teams paid or donated $2500  per team to participate in this event, and that full amount was donated to the Rett Syndrome Research Association at that time.

Guinness World Record Attempt for Fastest Time on the Mississippi River Attempt by 2 Teams
During the race, 2 teams  - Team Kruger and Team Double Helix - elected to attempt to set a new Guinness World record for the fastest time to paddle the Mississippi River.   This attempt was not part of our official race, but teams were welcome to do whatever they wanted on their own time.  Team Double Helix and Team Kruger were responsible for having witness signature forms/anything Guinness required and worked on this issue outside of the official race.

There were time obstacles during the race that may have affected this Guinness attempt.   However, if these teams had not been part of this USCA and AMA sanctioned event, it is possible  that neither team would  have been allowed to get through  Upper St. Anthony Falls Lock and Damas quickly as they did, nor  paddle on the closed parts of the river that was negotiated by our safety office with the Coast Guard.   Special thanks to Elizabeth Tynan (negotiated closed river issue)  and to Kent Spading  (assisted with Upper St. Anthony Falls Lock and Dam opening) for helping our teams get back on river as quickly and as safely possible.

Our Next Adventure!
Unfortunately, the forced stops, bad weather and severe flooding were too much to overcome to beat the record, at least for 2001....  so the top two teams (Team Kruger and Team Double Helix) formed a new team, "Team Hope", and smashed these records to create a new Guinness Record for fastest time down the Mississippi River in our next adventure - the  2003 Challenge for Rett Syndrome and Leukodystrophy!